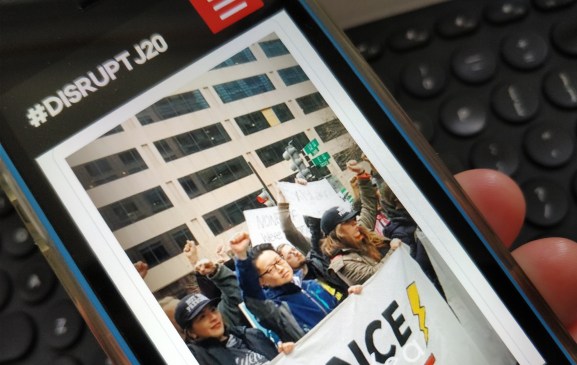 Webhosting service DreamHost has said that the U.S. Department of Justice (DOJ) has requested information on everyone who visited DisruptJ20.org, a website that was set up to organize political protests against the current U.S. administration.

The DisruptJ20.org domain, a reference to the president’s inauguration on January 20, was actually registered on DreamHost last October, a few weeks before the U.S. presidential election took place. But it launched to the public on November 11, a few days after Trump emerged as victor. The website was subsequently used as a conduit for organizing protests around Trump’s inauguration — some peaceful, some not so.

At any rate, DreamHost said that is has been “working with the Department of Justice to comply with legal process” for the past “several months” and that the company received a search warrant requesting myriad details pertaining to DistrupJ20.org in July.

Central to the request was information on the DistrupJ20.org website itself and its owner, but where things get contentious is in relation to the site’s visitors. According to DreamHost, the DOJ’s request includes 1.3 million IP addresses covering each device that connected to the website. This was in addition to “…contact information, email content, and photos of thousands of people — in an effort to determine who simply visited the website,” according to a blog post. “This is, in our opinion, a strong example of investigatory overreach and a clear abuse of government authority,” the DreamHost statement added.

After challenging the DOJ’s request based on the “overbreadth” of the warrant, DreamHost received a copy of an “order to compel” filed by the DOJ in the Superior Court of the District of Columbia that sought to dismiss DreamHost’s counterarguments. Last week, DreamHost filed its legal arguments in response.

However this plays out, it’s clearer than ever that technology companies are at the center of the growing tensions between governments and the various sides of the political spectrum, in the U.S. and elsewhere. Yesterday, fellow web hosting firm GoDaddy kicked neo-Nazi site the Daily Stormer off its service, and Google followed suit when the site sought shelter. But these are minor moves in the grand scheme of things, and many argue that Silicon Valley still can’t acknowledge its role in spreading hate.

For DreamHost, its core argument centers around protecting citizens’ rights to speak out against political forces they don’t agree with without fear that their identity will be revealed through an overreaching search warrant. The company added:

The internet was founded — and continues to survive, in the main — on its democratizing ability to facilitate a free exchange of ideas. Internet users have a reasonable expectation that they will not get swept up in criminal investigations simply by exercising their right to political speech against the government.