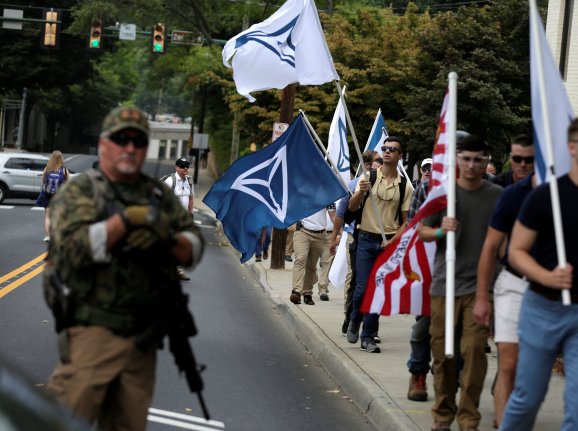 White supremacists pass a militia member as the they arrive for a rally in Charlottesville, Virginia, U.S., August 12, 2017

A couple of days ago, I took a shot at tech companies that had ignored the role their services play in enabling white supremacist and neo-Nazi groups. Now it appears the Nazi-fueled violence in Charlottesville last weekend has prompted a growing number of tech companies to finally take action.

Here’s a list of well-known companies that have moved to give hate groups the boot:

7. Twitter: Suspended a couple of accounts linked to The Daily Stormer.

8. Cloudflare: Said it would no longer allow The Daily Stormer to use its DDoS protection service.

10. Google: Also blocked The Daily Stormer from registering its site.

12. Uber: Banned a couple of known white supremacists from its service.

13. Airbnb: Blocked several neo-Nazis from using its service for the Unite the Right event in Charlottesville.

Finally, today Apple CEO Tim Cook announced the company was donating $1 million to both the Southern Poverty Law Center and the Anti-Defamation League. “We will also match two-for-one our employees’ donations to these and several other human rights groups, between now and September 30. In the coming days, iTunes will offer users an easy way to join us in directly supporting the work of the SPLC,” Cook said.

In an email to employees, he also wrote:

What occurred in Charlottesville has no place in our country. Hate is a cancer, and left unchecked it destroys everything in its path. Its scars last generations. History has taught us this time and time again, both in the United States and countries around the world.

We must not witness or permit such hate and bigotry in our country, and we must be unequivocal about it. This is not about the left or the right, conservative or liberal. It is about human decency and morality. I disagree with the president and others who believe that there is a moral equivalence between white supremacists and Nazis, and those who oppose them by standing up for human rights. Equating the two runs counter to our ideals as Americans.

Know of more services that have taken action? Let us me know at obrien@venturebeat.com and we’ll add their names to the list.