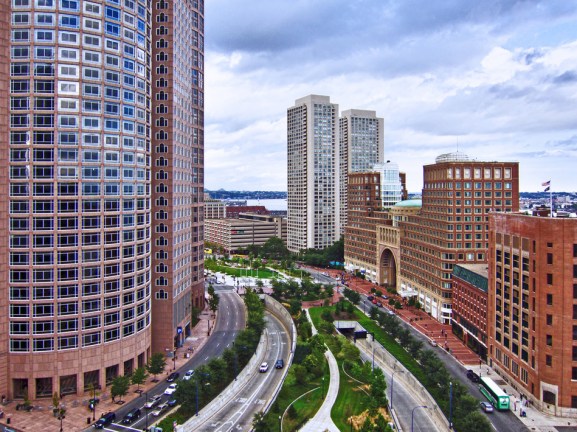 (Reuters) — The biotech industry is facing high rents and tight lab space in Boston, New York and San Francisco, forcing companies into the suburbs in a sign the “live, work and play” movement into big cities may have hit a roadblock.

For example, Modern Meadow, a biotech start-up poised to commercially manufacture leather from synthetic animal protein, was looking at a prohibitive $200 million cost to build its own lab in New York City.

Instead, it found existing lab space at the former U.S. headquarters of Swiss drug-maker Roche in Nutley, New Jersey, a scant 12 miles (19 km) from Midtown Manhattan.

Modern Meadow also secured $32.2 million in New Jersey tax credits at ON3, as the former Hoffman-La Roche site has been named by its new owner, Prism Partners.

The start-up’s search for adequate facilities is shared by other biotech firms that are encountering tight lab availability in New York, San Francisco and Boston, which attract the lion’s share of biotech venture capital funding.

Cities, especially those with powerhouse educational institutions that excel in sciences, are attractive to biotech companies because they provide better collaboration and transition from classroom to commercial production.

The issue with lab space in these cities is that real estate is very expensive, both to build and operate, said Andras Forgacs, chief executive of Modern Meadow.

“We don’t have the time and we don’t have the capital to be in the real estate development business in New York City. That’s not what our investors asked for,” said Forgacs, whose firm has raised $53.5 million from Sequoia Capital and Singapore’s sovereign wealth fund Temasek Holdings, among others.

“For start-ups especially it is important to have existing inventory that is virtually move-in ready,” Forgacs said.

His firm plans to spend $20.8 million in new construction and equipment and grow its workforce from more than 60 employees to 263 at the 116-acre ON3, where Prism envisions a mixed-use “streetscape” to replace razed buildings and empty lots.

Exosome Diagnostics moved to Waltham, Massachusetts from Cambridge two weeks ago, a shift that will reduce rent by three to four times, said Dan Baughman, the firm’s marketing director.

“It was a no-brainer. It’s infinitely less expensive,” he said.

Waltham also attracted Dragonfly Therapeutics Inc, which looked at more than 40 sites in Cambridge, where it started in 2015. Demand for space was high and the quality low, said Maura McCarthy, Dragonfly’s director of market development.

The lower cost of housing for employees was a benefit too, she said.

Triple net leases, where the tenant pays taxes, insurance and maintenance, are $78.50 a square foot in Cambridge and drop to $47 in Boston’s inner suburbs, $31 along Route 128 north and west of Boston and then $15 in the outer ring, brokerage Cushman & Wakefield said.

Funding this year through Wednesday for pharmaceutical firms in Boston is $1.08 billion, compared to the $570.7 million raised for companies in the three other areas.

“For the foreseeable future life science start-ups and R&D organizations requiring labs will have to look far afield with a creative eye,” Hartman said.