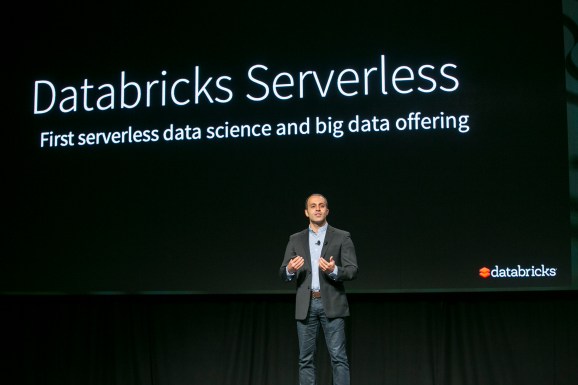 Databricks, which provides software to help fuse big data and artificial intelligence, announced today that it has secured an additional $140 million in funding in a round led by Andreessen Horowitz, with participation from New Enterprise Associates (NEA). New investors include Battery Ventures, Future Fund Investment, A.Capital Partners, Geodesic Capital, and Green Bay Ventures.

“Only one percent of the companies are really successful when it comes to processing and analyzing big data with AI,” said Databricks cofounder and CEO Ali Ghodsi, in an interview with VentureBeat. “But what about the other 99 percent who don’t have the expertise Microsoft, Google, Amazon, Twitter, and others have?”

Ghodsi and his team launched the Apache Spark framework in 2009 to help software engineers execute data processing and machine learning across several APIs. “Otherwise, you have to stitch together different software, be it Hadoop for big data processing or Tensorflow for AI,” he said.

Now, with Databricks, Ghodsi and his team have created what they call a “unified collaboration workspace” deployed in the cloud. “It’s kind of like Slack or Google Docs for AI,” said Ghodsi. Employees can share data and work on AI on the serverless platform — prototypes are currently running on Microsoft Azure, Google Cloud, and Amazon Web Services (AWS), with the majority of customers using AWS, Ghodsi said.

According to him, Databricks currently has 500 customers, including Shell, HP Enterprise, Salesforce, and Viacom. Use cases range from placing data-collecting sensors on oil-drilling equipment to correlating genomics data with medical equipment. Salesforce claims to be using Databricks for its Einstein inbox.

Since founding the startup in 2013, the Databricks team has raised a total of $247 million. The company will use the fresh injection of capital to branch out into new sectors, expand internationally, and hire more engineers. “Data will be the new oil,” said Ghodsi. “It’s the thing everybody needs.”

Based in San Francisco, Databricks currently has 220 employees.