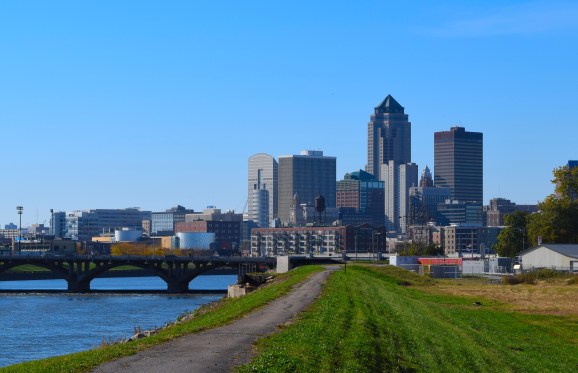 Iowa City-based IDx knows the importance of keeping tech talent in Iowa. The medical device company is entering into clinical trials for their AI technology that automates the detection of diabetic retinopathy in diabetes patients.

If the trial is a success and IDx becomes a leader in AI med tech, they’re going to have to scale up their team of 20. As they look ahead towards the possibility of increasing their staff to 100, 200 or more, they’re asking the question that all tech companies in the area are asking.

Is there enough tech talent in Iowa to sustain the scaling of the business?

“We’ve got a big clinical trial underway right now for FDA clearance over our diabetic retinopathy screening device,” said Ben Clark, chief operating officer at IDx. “What happens if we’re successful in that? […] We’ve sort of come across this common theme that we’re not the only ones experiencing this transition in a highly regulated space to automation.”

Iowa’s medTech industry, in particular, is struggling to keep technical talent in the state which is slowing industry growth. Over the past 10 years, the number of medical technology companies in the Creative Corridor has remained relatively flat, which is reflective of the broader trend of a nationwide decline in medical technology startups.

The Iowa Economic Development Authority (IEDA) has developed a program to help fight the loss of skilled tech professionals who are leaving the state to find employment elsewhere. Their program provides grant funding through student internship programs that match intern wages paid by a company dollar for dollar.

The program targets industries such as bioscience, advanced manufacturing, and information technology, and is beneficial to startups that can’t compete with the pay of other well-established companies.

Complete statistics for the year 2016 show that IEDA awarded 98 companies with grants, totaling 241 internships. 33 percent of eligible interns for hire were offered full-time positions, and 23 percent of those offers were accepted.

IDx is one of 126 companies that are benefitting from the program in 2017.

“The IEDA internship program allows us to tap into the emerging talent pool from the University of Iowa’s engineering, computer science, and business programs,” said Clark. “Since we’ve started [the program], we’ve grown from 3 employees to 20. Four of those have come to us from state-sponsored internship positions.”

Clark attributes this retention with the company’s commitment to providing valuable internship experiences.

“Their contributions often have a profound impact on the company’s strategy, and they leave with rich experiences for entering the workforce,” said Clark. “It’s been a great model for us to test whether folks that we see as being really capable would be a good fit for us in our present stage of development.”

IDx’s clinical study will include 900 subjects from 10 sites around the country. Clark hopes that the company can demonstrate that automated screening for diabetic retinopathy is safe and effective.

“There’s an incredible amount of expertise in this community on how to tackle the transition from work that’s being done by humans […] to leveraging technology to do it more efficiently,” said Clark. “Those are the conversations that we’re starting to move into. We’re also starting to think about how to tap into that broader pool of talent and use the story about how all the industries are aligned to hopefully attract some new people here.”

With 4 successful hires from the IEDA program, IDx is an example of how the grants can successfully create movement in the local scene.

“The IEDA program makes it so much more affordable to attract talented interns by being able to pay them decent wages,” says Pahl. “And these interns aren’t working on tiny projects that don’t get used. They get to learn so much more this way, and they really appreciate it.”

Both Clark and Pahl believe that internships are effective in keeping technical talent rooted in the area instead of moving to highly concentrated technology hubs like Silicon Valley.

“Once you have an intern, you can get them engaged and stir up their passion,” says Pahl. “The guys who go work for startups have other opportunities but choose to work there because they believe in the mission and have the opportunity to make valuable contributions.”