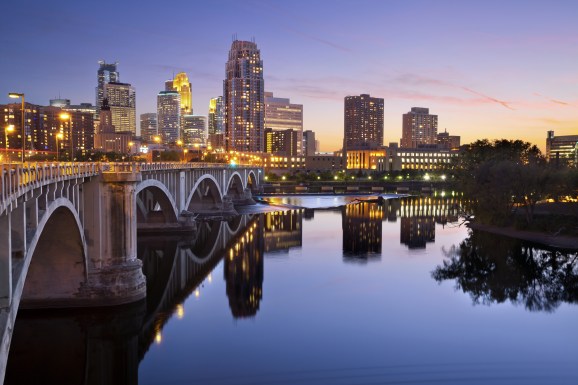 Branch makes software that helps hourly workers manage their schedules. The company’s shift managing and communication system allows employees to take a picture of a paper schedule and automatically import that data into Branch’s app. They can also use the app to switch shifts with other employees.

Minne Inno sat down with Siddiqi at Branch Messenger’s space in the Industrious coworking office to discuss the company’s growth and his take on the Twin Cities startup community. Note: Conversation has been edited for brevity and clarity.

Minne Inno: How has the company grown since graduating from Techstars?

Atif Siddiqi: We’ve grown considerably. We did a pilot program with 10 Target stores last year. It was a perfect opportunity for us to learn from Target and their experience. It went really well, and now we’re in hundreds of stores and scaled across a couple different states. We’re also expanding with different business units of Target, and getting a lot of interest from other Fortune 500 companies.

We’ve seen tremendous growth on usage of the application. I believe it was 457 percent over the last seven months. It’s pretty exciting times at Branch, so we’re just stepping up to meet those times.

MI: What are you excited about now that Branch is growing?

AS: One of the things we’re excited about is growing the team and bringing really quality talent to what is now a pretty close, tight-knit team. But we’re scaling that up. The other thing is that we’re constantly adding to the platform. And continuously iterating on the product really excites us.

MI: What are your plans for the new round of funding?

AS: We’re really excited about that. A lot of it is going to growing the team. We’re actively hiring engineers, customer success, as well as sales here in the region. And really just trying to deal with the demand we have from clients. We see ourselves doubling in size in the next 12 to 18 months.

MI: What made you decide to move to Minnesota?

AS: It really happened organically, to tell you the truth. I think early on in the program we saw it was a good place to be for a B2B software company. There’s a lot of Fortune 500 companies here, especially in the enterprise segment. There’s a lot of great engineering and sales talent here. And there’s an ecosystem that’s been cultivated by both of those things. There’s resources where we can scale up the team. So it made sense for us to have a presence here, and that’s turned into scaling a team here.

I think what’s good to see too is the appetite of investors in the region that are looking to invest in early stage companies, which has really helped us. There’s a lot of angels in the community here too. We realized it’s a place where we can grow very fast for a company like us.

MI: That’s interesting that you brought up investors. What’s your experience been like finding funding in the Twin Cities?

AS: I think you have institutional investors like Matchstick that seek out companies like us. But one of the things we found is that the angel community here is pretty active. A good portion of our initial seed round was from angels here in the area. So that was something we didn’t really anticipate, but it was nice to see.

MI: How would you describe the tech ecosystem in the Twin Cities, and how does that compare to somewhere like Pasadena?

AS: I think it’s growing, which is nice to see. It’s good to see a lot of events around tech community here. I attended startup week last year, which was great. Events like Minnedemo are great. It’s a very tight-knit ecosystem, but you have a lot of great, growing companies now, and the more larger wins the ecosystem has, the more talent and things it will attract.

MI: What’s it like being a Techstars mentor this year?

AS: It’s been great being on the other side of the table and sharing experiences. It’s been nice to give back that way, and hopefully we can get one other company to stay.

MI: Do you think that as Branch continues to grow that you’ll stick around the Twin Cities?

AS: Yeah, we’re committed to the Twin Cities. We’ve been enjoying our time here so far, and we’re looking forward to continue to grow here.