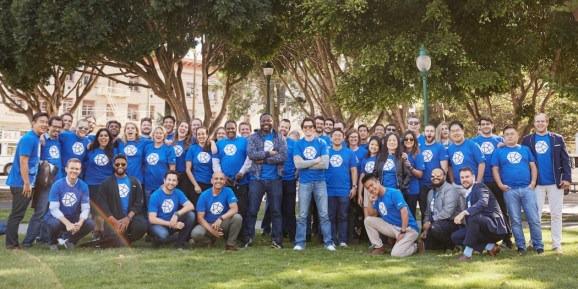 The Gigster team poses for a photo.

Gigster, a service that makes it easier for companies to hire a team of freelancers for a software project, announced today that it raised $20 million in its series B funding round.

The company allows its clients to hire not just individual freelance engineers, but entire software teams composed of developers, product managers, and designers, all of whom have been vetted. Gigster should allow larger businesses like eBay, Staples, and Prudential to spin up teams to tackle new projects without having to focus on hiring software talent.

Some of the funding will be used to help Gigster scale up its workforce. Company founder Roger Dickey said in an interview that the firm plans to hire 100 people over the next year as it builds out its operations.

What sets Gigster apart from a typical staffing agency is that the company offers a layer of software to support freelancers creating new software, which can improve the outcomes from these projects. One piece of software will predict delays in a project ahead of time, for example, by looking at patterns of how the current work compares to the outcomes with past projects.

In addition, Gigster’s software is used to evaluate requests for help and assign the right teams to a project.

Dickey said that the company’s vision is for Gigster to power the world’s engineering projects. Thus far, the company has raised a total of $32.5 million to help accomplish that goal. It raised its last funding round, led by Andreessen Horowitz, in 2015.