YouTube today rolled out a revamped design, with a few extra features to boot. This is part of the Google-owned company’s broader plan to add more functionality while also offering a more consistent look across desktop and mobile.

First and foremost, YouTube has a new logo and icon, as you can see above. YouTube describes it as “a cleaned up version” that “works better across a variety of devices, even on the tiniest screens.” The brighter icon is basically an abbreviated logo, which should be easier to see when real estate is scarce. The new logo and icon will start rolling out across mobile and desktop today, and across all other apps and services “soon.”

Next up, the desktop has received Google’s Material Design mantra. As first shown off in May, YouTube on the desktop now has “a fresh, simple, and intuitive user experience that lets content shine.” The best part of this update is the Dark Theme, which turns the background dark while you watch: 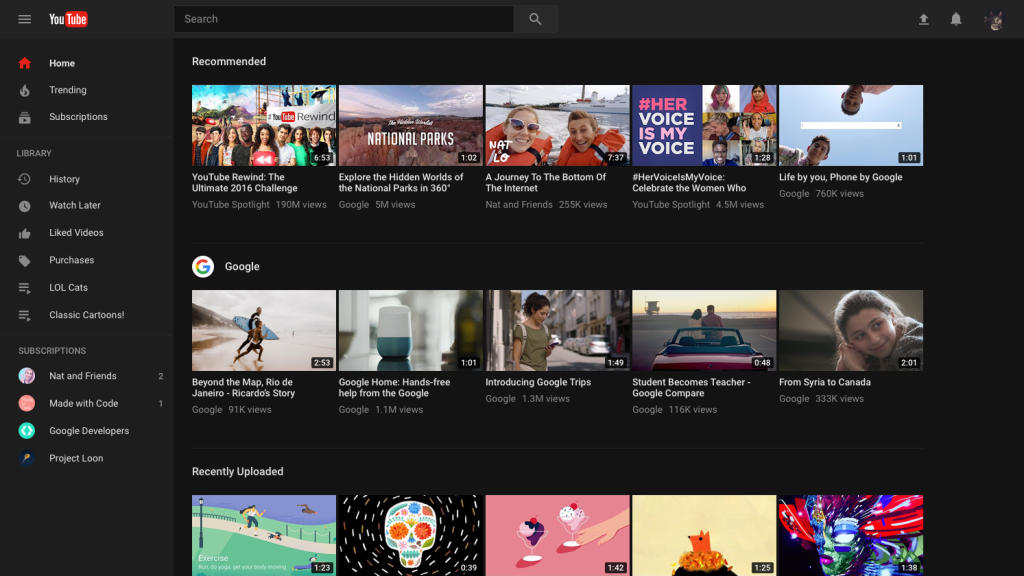 As for the mobile app, which is likely where you access YouTube the most, the team is highlighting a slew of features, some new and some old (we’ve omitted the latter). There’s a clean new design too, of course, which makes the header white, moves the navigation tabs to the bottom, and adds new Library and Account tabs.

The YouTube app now lets you speed up and slow down the playback of a video, just like on the desktop. YouTube has also been experimenting with changing the shape of the player to match the video format you’re watching (vertical, square, or horizontal) and transforming the area below the player so you can browse videos in new ways. In the coming months, a new gesture will let you jump between videos by swiping left to watch a previous video and swiping right to watch the next one.

There’s a lot of changes here, but they’re all iterative. Still, it’s great to see YouTube working on all these improvements and not just on “innovation,” like the new useless chat feature.