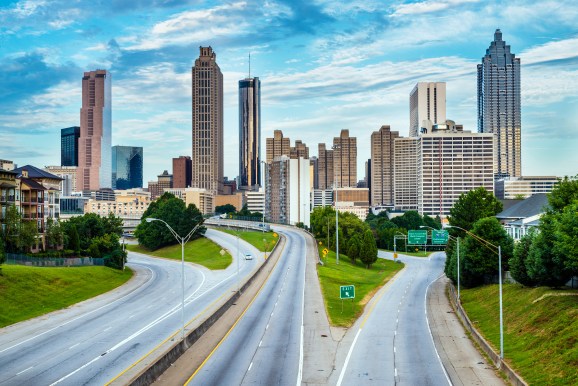 Earlier this year, Dell released their third annual report ranking cities on their ability to attract and support High Potential Women Entrepreneurs, defined as female entrepreneurs that are growing businesses with the potential to break $1 million or more in annual revenue. Out of 50 cities around the world, Atlanta ranked 18th overall, ahead of cities like Portland, OR; Tel Aviv, Israel; and Miami, FL.

In fact, if you don’t count Miami (and most southerners likely wouldn’t), Atlanta was the only city in the southern U.S. to even rank on the list.

The growth rate for Atlanta’s female entrepreneurs continues to trend upwards as well — the Center for an Urban Future shows the city as a top five (number three, to be exact) highest-growth city for women-owned businesses, with a 65 percent growth rate between 2007 and 2012.

And with Atlanta’s confirmed position as a tech capital, a growing recognition as a startup hub, and a pool of tech talent that recently landed a top five spot on CBRE’s Scoring Tech Talent Report, it’s safe to say many of these female entrepreneurs are building high-growth technology companies.

Much of this talent comes out of Georgia Tech, the top 10 engineering school that produces the most female engineers in the country. The 2015 class of engineers had a 32 percent female enrollment, compared to a national average of 17 percent. Females are well-represented in the College of Computing and other undergraduate schools.

While many of these grads go to Fortune 500s or Silicon Valley, plenty are starting their own tech companies — sometimes as students. Candace Mitchell began her startup journey as an undergraduate at Georgia Tech — she conceived of an idea for personalized haircare software and pitched in a university-run competition.

Along with three other female Georgia Tech co-founders, Mitchell created Techturized, a beauty technology company that specializes in hair care science. The company analyzes data points about each user’s hair, which they say is “as unique as a fingerprint,” to recommend tailored hair care solutions. Their consumer brand Myavana employs a monthly membership model to provide subscribers with personalized scientific hair analysis.

After graduating and receiving funding and education from a Georgia Tech-based startup accelerator, Flashpoint, Mitchell continues to lead the five-year-old company to make their mark on a $500 billion hair care industry.

These female student entrepreneurs have a set of role models in their professors. Robotics expert and engineering professor Dr. Ayanna Howard was studying how to use robots to teach children with disabilities. Along with a co-founder, she utilized the technology to start a company called Zyrobotics, spun out of the Georgia Tech VentureLab startup incubator.

One of their first products was a small robot designed to complement physical therapy for children with motor skills disabilities. Zyrobotics now develops mobile-accessible technologies for children with conditions like cerebral palsy, autism, and learning disabilities; for example, a Bluetooth switch interface to help motor-limited children use tablets without having to touch the screen. They also have a suite of STEM-focused educational apps.

ATL’s female entrepreneurs abound outside of academia as well. A recent success story is Jewel Burks, the 28-year-old founder of Partpic (now operating under A9.com), which was acquired by Amazon in 2016. A9 oversees all search system operations on Amazon sites in North America, Europe, and Asia, including visual search.

Partpic started when 24-year-old Burks was working in sales for a major parts distributor and became frustrated by how many customers would call without actually knowing what part they needed. She set out to build a system based on computer vision technology that makes it easier to identify and buy repair parts by simply taking a picture of the broken part with a mobile phone or tablet.

The startup scaled within the Advanced Technology Development Center (ATDC), the longest-running startup incubator in the country. Burks slayed at pitch competitions across the country, winning the 2015 SXSW Accelerator Showcase and a $100,000 prize from Steve Case’s Rise of the Rest tour.

While building Partpic, Burks also served as an entrepreneur in residence for diversity markets at Google. She says her biggest focus today is to continue to mentor female founders, particularly those of color.

Mitchell also continues to serve as a mentor to Atlanta’s women tech entrepreneurs.

“Genius comes in all walks of life, all races, and genders. We’re not here to fit the mold, we’re disrupting the mold,” says Mitchell. “I hope to see an increase in the number of tech products launched and scaled by minorities and women, as well as the amount of capital going into our companies after mastering the basics of revenue growth and profitability.”

“I want to see the first minority-led billion-dollar tech company founded and grown in Atlanta.”

While Burks and Mitchell were both able to raise funding, access to capital is still a challenge — likely the biggest — for Atlanta’s female tech founders. In the Dell report, Atlanta’s lowest data point out of five measured pillars (Capital, Markets, Talent, Culture, Technology) was Capital, where the city ranked at #32 overall.

Capital was identified as the biggest constraint to female entrepreneurs globally — no surprise, given the documented gender gap in venture funding. In a region like the South, where VC money is less plentiful overall than a Silicon Valley or Boston, lack of funding can seem an insurmountable obstacle.

There are programs at work trying to combat this by providing resources specifically to female entrepreneurs. The Women’s Entrepreneurship Initiative (WEI) is a City of Atlanta-supported incubator dedicated to female founders. Ascend 2020 Atlanta is part of a national program financed by JP Morgan Chase to support minority and women-owned tech companies and small businesses.

Eventually, those leading these programs hope that by building a generation of female tech founders like Mitchell, Dr. Howard, and Burks, they will turn around and educate, mentor, and possibly even help fund the next group of female founders.

And for Atlanta, that could be a game changer. The Dell study found that there is a “dramatic uplift” in a city’s economic prospects once impediments to female entrepreneurship are removed.

For the second-tier tech cities competing with established hubs of Silicon Valley and New York for capital, talent, and Fortune 500s, female tech entrepreneurs may make all the difference.

Holly Beilin is the editor-in-chief of Hypepotamus, a publication that covers the southern innovation ecosystem.