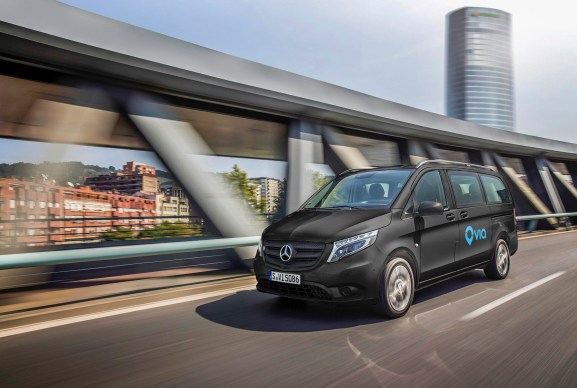 Innovative on-demand shared ride service to launch in Europe: Mercedes-Benz Vans sets up joint venture with US start-up Via

Mercedes-Benz announced today that it has created a joint venture with U.S.-based Via to launch a new ride-sharing shuttle service in Europe that will debut in London later this year.

The Daimler-owned German automotive maker’s Vans division will invest $50 million in Via, which offers a carpooling service in several U.S. cities. In addition, Mercedes’ Mobility division will become a strategic investor for an undisclosed sum.

“On-demand ride-sharing offers many new ways of making city traffic efficient, needs-based, and sustainable — especially when it involves the use of spacious, safe, and comfortable vans,” says Volker Mornhinweg, head of Mercedes-Benz Vans, in a statement. “Via is one of the most successful providers in the growing ride-sharing sector while Mercedes-Benz Vans has the perfect vehicles that are being continuously optimized for this job. By deepening our cooperation with Via, we are thus taking the next logical step in the context of our strategy for the future and are expanding our range of new mobility services.”

The investment by Mercedes is just the latest sign of the growing convergence between traditional automotive companies and upstarts like Via. Transportation is increasingly seen as ripe for disruption, whether it’s being made more efficient by new technologies or completely overturned by new modes like Hyperloop. in 2014, Mercedes parent company Daimler acquired MyTaxi, which lets users hail a cab via a mobile app in Europe.

Carpool seemed to be one of those obvious methods of ride-sharing that would be perfect for the digital age, but has in fact proved much harder to crack. Uber, for instance, offers UberPOOL, but it has started tinkering with the idea of how to get passengers to move to different blocks for pickups and drop-offs to make the service more fluid and less expensive.

Via now offers its carpooling service in three cities: New York, Chicago, and Washington, D.C. The deal with Mercedes will bring it to London and other European cities next year. In addition, Mercedes said it will work on developing its vans to make them more compatible with the Via service.

Via has previously raised more than $100 million in venture capital. It was cofounded by two Israeli entrepreneurs and is now based in New York City.

The latest investment is part of a larger fundraising round for Via. TechCrunch reported that the round could be as high as $250 million.

In an email, a Via spokesperson wrote: “I can’t share any final numbers until the round is officially closed; however, this partnership and investment from Daimler is part of a larger round being raised. The $50 million mentioned in the release is going into the JV, while there’s a larger strategic investment directly in Via to support its continued growth.”