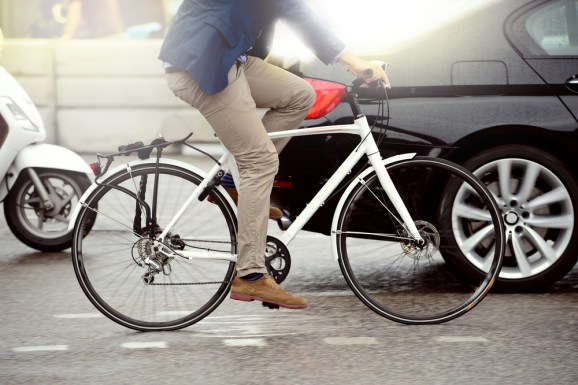 I started biking on a regular basis last summer. On almost every business trip, I’ve arranged to use a bike as a way to stay in shape or to commute around a city. And I’ve taken countless bike-camping trips, most of them in my home state of Minnesota.

Last year, during a visit to the Mountain View area in California, I witnessed a bike accident for the first time. It didn’t look overly serious — but then again, getting hit by a car when you’re on a bike is always serious, even if you can jump up and brush yourself off.

When I found out a company called Tome Software was going to start a trial that uses AI to reduce bike accidents, I took note. This is not a typical use case for AI. Most of the work in machine learning is focused on things like smart home integrations, automated cars, Facebook bots, and apps that make it easier to travel or check the weather forecast.

Biking in general is something we take for granted. It’s a leisure activity, but then again, it’s something most of us have done as kids or adults. It’s widespread but a bit overlooked.

I like how Tome Software is approaching its research. The company will start by testing real cyclists using Trek bikes at the University of Michigan’s TechLab at Mcity. (Tome, like many other companies that work in the transportation sector, is based in Detroit.) It plans to focus on what Jake Sigal, the CEO for Tome Software, told me is the most common type of accident — a car hitting a bike from the side or behind. The company will create a system that can alert both the cyclist and driver that a bike is in one of those danger zones.

This is where the machine learning comes in. It will correlate several data sets — in the most common areas where a bike could be in danger, the AI will examine factors like time of day (bright sun at dawn), road characteristics (such as the speed limit and berm width), and existing crash data from cars and cyclists in that area. The research will go beyond what a lidar sensor on a car or a bike can actually see on the road.

The AI is meant to reduce the number of warnings sent to drivers and cyclists, not to become a distraction. Sigal says the test is really all about signaling only when the cyclist is in danger and in a red zone where a crash could occur.

“What’s really tough for a computer and the radio frequency tech is understanding whether a cyclist is on a greenway next to a road or on the road itself,” says Sigal. “Many of our communities in southeast Michigan have bike paths next to major roads that are safe for vehicles and bikes. We are hoping that our work with ML/AI will help reduce false positives for warning alerts. We can’t cry wolf, and AI/ML may be able to help.”

Eric Bjorling, the brand manager for Trek, noted in a press release that the idea is to make sure the most basic need for a cyclist — being warned about dangers from passing cars — is met.

For now, Tome is just entering this new research phase, along with Trek. For me, it’s an interesting project because it means reducing bike accidents by warning both the cars and those on bikes in the most dangerous intersections. Let’s hope the project speeds along quickly.