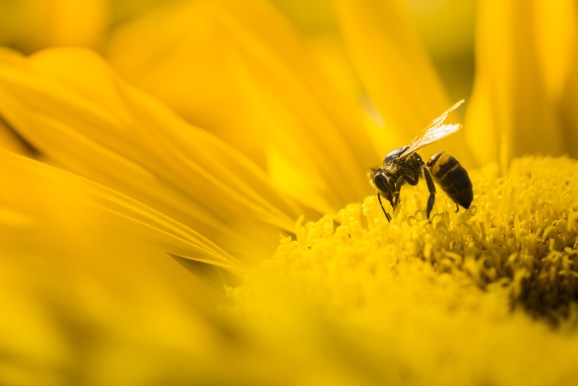 America’s agricultural sector faces an unprecedented crisis. Native honeybees, one of the most prolific pollinators in the animal kingdom, are dying off at an unprecedented rate from Colony Collapse Disorder (CCD) and threatening an ecosystem service worth about $15 billion.

Supported by the National Science Foundation (NSF), the RoboBees project looks to minimize the loss of this critical resource with new microbots that can mimic the pollinating role of a honeybee. But the project has a number of challenges to overcome before these robots can take to the skies.

The RoboBee is a microrobot inspired by the biology of a honey bee. In a remarkable display of biomimicry, scientists have developed a flight-capable robot that’s just half the size of a paperclip and weighs in at one tenth of a gram.

“This is a proof of concept — there’s nothing compared to this. It’s a totally first-time demonstration,” said lead author Eijiro Miyako, a chemist at the National Institute of Advanced Industrial Science in Tsukuba, Japan, in an article published in Scientific American.

The RoboBees project pushes the boundaries of research in a variety of fields, from micromanufacturing to energy storage and even the computer algorithms that control the robots by the swarm.

In 2012, scientists at Harvard showcased the first controllable flight of an insect-scale robot, heralding the first major breakthrough and proof of concept for these prototype bots. The RoboBee achieves flight using piezoelectric actuators, small strips of ceramic material that expand and contract when an electric current is supplied, mimicking muscle tissue. The wings operate independently, allowing for controlled flight — a miraculous achievement for a robot that weighs less than an actual honeybee.

The RoboBee owes its weight and size achievements to new microscale manufacturing methods that make use of a technology called “pop-up microelectromechanical (MEM) technologies.” Pop-up MEMs allow unprecedented scale for the RoboBees and open doors for further development.

Harvard’s latest generation of RoboBees is making waves — literally. The biggest breakthrough for the next generations of RoboBee was announced in 2015, when new algorithms were developed that allowed the tiny robot to swim underwater. The algorithms allow scientists to control the RoboBees’ wings in new ways and guide the tiny robots through water. Here, scientists borrowed from nature yet again after observing the way puffins used their wings to sail through the water during a dive.

Scientists are also looking to overcome challenges of energy usage, the biggest remaining barrier to the RoboBees’ development. In an article published in Science in May 2016, scientists described a new method of energy conservation enabled by stronger, more efficient wing systems that allow the RoboBee to carry just a bit more weight.

These scientists, from Harvard and other top universities, looked to the perching behavior of most birds and insects to give the RoboBees their next upgrade: small foam caps. The caps sit on the top of the tiny robots’ structure and provide a platform for electrostatic adhesion, allowing the RoboBees to perch on nearly any surface to save energy. The foam caps add a few more grams of weight, but they allow the RoboBee to “rest” during a flight, dramatically increasing its potential run time.

“A lot of different animals use perching to conserve energy, but the methods they use to perch, like sticky adhesives or latching with talons, are inappropriate for a paper clip-size microrobot,” said Kevin Ma, who’s doing his postdoc work at the Harvard John A. Paulson School of Engineering and Applied Sciences and the Wyss Institute and who coauthored the paper.

Biomimicry again provided the inspiration for the robots’ ingenious, low-power perching ability, which Harvard demonstrated on the surface of a leaf. When perching, the RoboBee uses 1/1,000th of the power used when hovering.

The next big steps

While honeybee populations have increased very recently, diseases, pesticides, and CCD still have scientists working harder than ever to move the RoboBee from concept to reality. The ability to operate under their own power and communicate as a hive remain two significant obstacles for the tiny robots.

Until now, the RoboBees have been operating with a microthin wire that transmits power to the bee’s muscles. Transitioning to an onboard battery requires a greater weight capacity and smaller power sources. Both are currently under development, and Ma is hopeful that a breakthrough is around the corner.

“Once the robot can stay aloft on its own, we would be working on things like allowing it to perform tasks, increasing its battery life, and making it fly faster,” Ma told VentureBeat.

In a beehive, honeybees use sophisticated “dances” to indicate the direction and distance of a potential source of nectar. Coupled with pheromone releases and the scent of the flowers themselves, bees are able to hyperfocus on single flower species, harvesting nectar while pollinating every flower they intercept.

Over the last few years, the Internet of Things (IoT) has connected more and more devices, allowing them to interact without continual human input. And while it’s hard to tell whether the IoT will help the RoboBees work together in the next few years, a similar hive-mind capability is crucial to their development and represents the next big task for Harvard’s team.

While the effect of a single robot might be miniscule, a coordinated group of hundreds, thousands, or millions of RoboBees could perform a host of unprecedented tasks. Aside from pollinating plants for agricultural purposes, the RoboBees could coordinate to digitally map terrain, monitor weather conditions, and even assist in relief efforts after a disaster, through data collection. While RoboBees are only intended as a stopgap measure for honeybee loss, the potential applications of the technology have the world holding its breath for the next breakthrough.

Cosette Jarrett is the guest post editor over the AI and Transportation channels at VentureBeat.