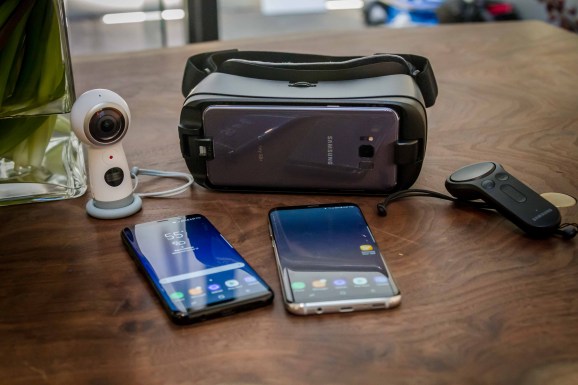 Some of the devices announced at Samsung Unpacked: the Galaxy S8/S8+, the redesigned Gear 360 camera, and Gear VR headset with Oculus-powered controller.

When Samsung’s Note 8 smartphone launches on September 15, it will be accompanied by a new version of the company’s Gear VR headset, made in partnership with Oculus. This latest iteration doesn’t boast any new features, but Samsung did say that it was the only version of the device the Note 8 would support.

Yesterday, however, we received a tip from Josue Feliciano, who says he got a Note 8 early through Verizon. Feliciano upgraded from the Galaxy S8+, which was released earlier this year alongside the last iteration of the Gear VR (pictured above). The S8+ and Note 8 are both big phones, so Feliciano tried to fit the new phone inside the early 2017 Gear VR. He said it works.

So we reached out to Samsung to ask about Note 8 Gear VR compatibility. The company told us: “The Galaxy Note 8 requires the new Gear VR with Controller headset, which is available for pre-order now and will go on sale September 15.”

Feliciano then sent us a video of the Note 8 being inserted into the older version of the Gear VR. The phone fits into the device with what appeared to be little trouble and boots up in VR as expected.

We followed up with Samsung. The company offered the following statement: “We introduced a new Gear VR headset that accommodates the Galaxy Note8 form factor while ensuring backwards compatibility. We do not recommend trying to fit the Note8 into older Gear VR headsets.”

If you’re planning to pick up a Note 8 and the new Gear VR within the next few days and you already own the older 2017 model, perhaps it is best to wait and see more first-hand reports, or if Samsung provides more detail as to why this is not recommended. If you don’t yet own a Gear VR, then the $129.99 price is exactly the same as the older model.