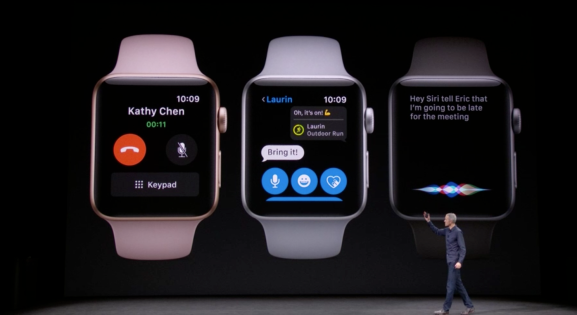 The next generation Apple Watch will finally let people leave their iPhones at home. Apple COO Jeff Williams announced today that the company’s latest revision of its smartwatch will include a cellular modem for phone calls and internet access, along with a more powerful, dual-core processor.

It’s called the Apple Watch Series 3, and — like its predecessors — will come in a variety of case materials, finishes, and sizes. A built-in SIM card will let users take calls from the same number associated with their iPhones, so they don’t need to tell friends and relatives a different way to contact them when their phones are put away. The Watch Series 3 also comes crammed with a W2 chip that provides faster and more efficient Wi-Fi and Bluetooth connectivity.

The new Apple Watch looks almost identical to the old ones, save for the red marking in the center of the Digital Crown on its side. It’s the same case size as the Apple Watch Series 2, though the rear crystal (which holds the heart rate monitor) has been expanded by .25 millimeters.

Adding cellular connectivity to the watch means that people will be able to stream music to their wrists and interact with other applications like WeChat without a phone present.

Customers will be able to choose from 38mm and 42mm cases in aluminum, steel, or ceramic. The new watches will be compatible with Apple’s older watch bands, so people who have several will be able to use them with the new device. Apple also announced a set of new watch bands, including a Sport Loop that’s focused on durability and breathability, along with new Hermès bands.

There’s still a big question hanging over the Apple Watch Series 3: Will these new features cause people to buy one and convince existing customers to upgrade? That’s hard to say. At the end of the day, this is a more expensive, more powerful, and slightly more capable Apple Watch. Whether that’s enough will likely depend on the consumer.

The Apple Watch Series 3 comes with watchOS 4, the next version of Apple’s smartwatch operating system that the company first unveiled at its Worldwide Developers Conference in June.

WatchOS 4 comes with a number of new features, including a new face that presents content based on suggestions from the company’s Siri virtual assistant; a News app; and a new list view for all of the applications installed on a device. The OS update will be available to all existing Apple Watch users starting September 19.

Consumers will be able to start ordering the Apple Watch Series 3 starting on September 15, and the devices will come out September 22. The 38mm aluminum base model with cellular connectivity will start at $399, while a non-cellular Series 3 watch will cost $329.

The Apple Watch Series 3 without cellular connectivity will only be available in aluminum, so folks who prefer stainless steel or ceramic will have to shell out for the more expensive cellular model. Those start at $699 and $1,299, respectively.

Customers will only be able to pick up the cellular Apple Watch Series 3 in Australia, Canada, China, France, Germany, Japan, Puerto Rico, Switzerland, the U.K., and the U.S. at launch. Other countries are expected to get the wearable device starting next year.