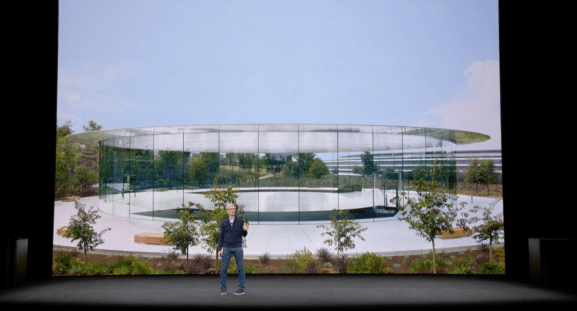 During the inaugural iPhone event at the Steve Jobs Theater, CEO Tim Cook announced that Apple employees will be occupying the new Apple Park campus a bit later than expected.

“We’ll start moving into Apple Park later this year,” Cook said. “Of course, such a large move, it’s really more of a process, and the first step is the opening today of the Steve Jobs Theater.”

Apple announced in February that employees would start moving in this past April. And publicly, the company seemed to leave the impression that move was already underway.

“Apple today announced that Apple Park, the company’s new 175-acre campus, will be ready for employees to begin occupying in April,” read the February press release. “The process of moving more than 12,000 people will take over six months, and construction of the buildings and parklands is scheduled to continue through the summer.”

Indeed, in a July 26 Wall Street Journal profile of Jony Ive, the Apple design guru who helped oversee Apple Park construction said his team would be among the last to move in at the new campus.

“In the next few months, Ive will transition from being the creator of Apple Park to one of its thousands of users,” the story said. “His design team is scheduled to be one of the last to move into the new headquarters this fall — around the same time as the event at which Apple has typically unveiled its new iPhone.”

That event would be the one held today.

It’s unclear what caused the delay, though it’s not entirely surprising given the scope and cost of the construction. Apple had not responded to a request for comment.

Originally, the company had hoped construction would be done by the end of 2016. Drone footage throughout the summer has shown construction ongoing on the massive new home for Apple.

Indeed, the company only got a temporary occupancy permit for the Steve Jobs at the very last minute.

A separate Temporary Occupancy Permit obtained by VentureBeat seems to indicate that Apple has only received limited permission to begin moving into parts of the main building as of the end of July.