Let’s review a few headlines from this past week:

On LinkedIn, an abundance of such headlines led to the summary:

With words like Crash! Tank! Dip! Dive! Slide!, you can be forgiven for thinking the bottom’s fallen out of bitcoin. Even articles with less sensationalist headlines, like this one from Bloomberg, still display frightening graphics: 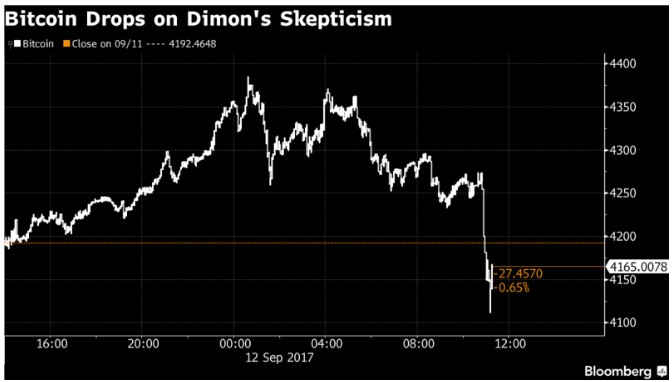 And then you realize that the Y-axis begins at $4,100 and tops off at $4,400. And that the headlines and articles conveniently omit:

Can you imagine the headlines if cryptocurrency actually imploded: “Bitcoin super-ultra-crashes, for real this time!”

Obsessively reporting on dips and gains, with exaggerated headlines, might have precedence in how stocks are covered, but for bitcoin it’s especially misleading.

Why this approach doesn’t work

The day-to-day price of bitcoin doesn’t matter. Invest in the blockchain if you think it will one day replace gold or power infrastructure. Don’t if you’re looking for stable, short-term gains. Bitcoin is a 0 to 1 bet, closer to a seed investment in a startup than a publicly-traded stock.

Jumpy headlines about price fluctuations help the bad guys. One strategy among bitcoin heavyweights is to wait until bad news hits (like the China ICO ban), then sell off just enough bitcoin to spark a consumer and media panic, then rebuy to inspire a rally. The biggest losers in this scheme are new investors who haven’t been properly educated.

Jumpy headlines also make life miserable for those working in the space. I’m chipping away at an esports blockchain project and, as you can imagine, friends forward me “bitcoin has finally crashed!” articles all the time. My heart skips with every ping.

A narrative pushed this week is that bitcoin lost value because the CEO of J.P. Morgan, Jamie Dimon, called it a “fraud.” You’ll see cause-and-effect attributions like this a lot in cryptocurrency coverage and they’re astonishingly naive. As an example, let’s scrutinize the Dimon claim:

It’s extremely difficult for the average journalist or observer to track down the causes of cryptocurrency fluctuation. A retired programmer finds an old hard drive containing $100 million in bitcoin. He anonymously cashes out, triggering a butterfly effect. That same week Jamie Dimon criticizes bitcoin. And there you go, a neatly-explained 7 percent “crash.”

Improving bitcoin media coverage requires nothing special, just common sense: Don’t go overboard on headlines. Don’t obsess over pricing fluctuations if they’re within normal volatility. Don’t blindly attribute causes to every jump or dip. Report on context; if in one week bitcoin rises 200 percent but then falls 20 percent, is that fall significant or just a few people cashing out gains? Visit bitcoin message boards and learn what actually drives movements. Most importantly, stop treating bitcoin like you would a normal stock; it’s fundamentally different (for example, bitcoin is a 24/7 market).

Adam Ghahramani is a partner at bison.gg, a cryptocurrency that invests in esports games, events, and teams. Find him at adamagb.com.