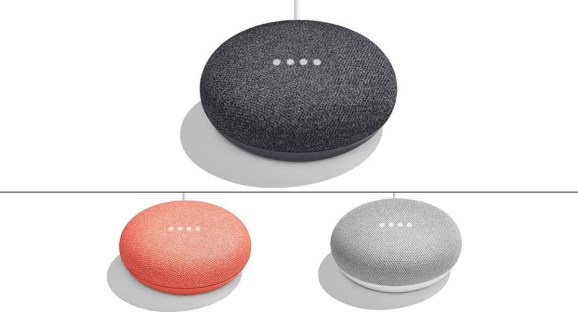 Google is reportedly planning to release a new miniature version of its Google Home smart speaker. Just like the Google Home, the Home Mini will come with Google Assistant inside to schedule tasks, control smart devices, and play music. The new device will cost $49, according to information shared with Droid-Life.

At $49, the speaker will compete directly with Amazon’s Echo Dot, which is also sold for about $50. The Google Home sells for $129, while the Amazon Echo goes for $179, though it’s often on sale for less.

It comes as no surprise, but price is the number one determinant of why consumers buy a smart speaker, according to a survey by Morning Consult.

According to Droid-Life, which claims to have obtained pictures of the new devices, the Home Mini will come in three colors: Coral, Chalk, and Charcoal. The speaker is rumored to be released on October 4 at a hardware event Google announced — with few details — on a billboard in Boston and in a YouTube video last week.

Like the Echo Dot, the speaker will be plugged into the wall, rather than featuring rechargeable batteries. As you can see from the above image, a series of lights will be located on the top of the device, presumably to indicate that it is listening to you, just like the four colorful spinning dots on top of the Google Home.

Reports first emerged last month that Google plans to release a new speaker to rival Amazon’s Echo Dot. As always, Amazon has not released any official sales numbers for its Echo Dot, merely saying that the cheap device was the most popular item sold during Prime Day this summer.

The new Google Home Mini is one of many smart speakers with Google Assistant to succeed the Google Home. A series of other speakers were announced last month, including the Sony LF-S50G, Zolo Mojo by Anker, TicHome Mini by Mobvoi, and the GA10 by Panasonic.