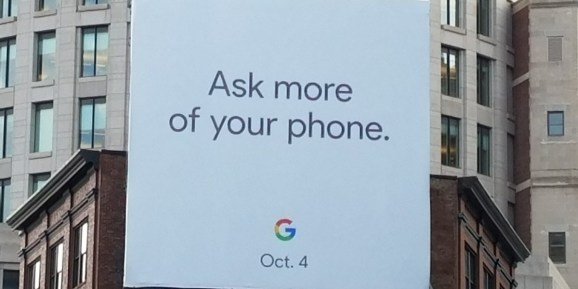 It only takes two words to get my attention these days. In a teaser for an upcoming Google event on October 4, Google uses the phrase “ask more” in the URL. The pitch is simple: The search giant wants us — just a few weeks after Apple announced the new iPhone X — to consider a new phone, one that will probably be called the Pixel 2 and will likely cost a lot less than $999 (I hope).

Yet my sense is that the phrase is a subtle reference to what’s coming on the phone — the ability to do more and ask more with bots. There’s no question about the recent amazing shifts in technology that allow us to talk to bots instead of type web searches. The AI built into the Google Assistant that runs on the current Pixel and Google Home speaker is arguably better than Alexa, given the fact that the bot can answer questions within context. You can ask “How are the Minnesota Vikings playing?” and then “Who is the quarterback?” and the bot knows you are still talking about the Vikings. Alexa and Cortana, not so much.

My hunch about the Pixel 2 is that the bot will offer more contextualization, more help in situations where you don’t know the right questions to ask. My hope is that Google makes the bot more proactive, not just answering questions but also asking them.

Let’s say you want to set up a meeting. Today, you can do this with most bots if you know what to say and if you know the contact. A more proactive bot that understands context would go much further. You’re sitting at your desk and say, “OK, Google — set up a meeting with a contractor.” That’s way too vague for most bots these days. But a smarter bot — one that lets you “ask more” — would likely start asking you questions. “John, are you adding on to your house?” You’d go through a discussion with the bot, one that knows the outcome — you want to meet with someone — and walks you through the same process you’d likely do in a web search.

The bot might already know you like to work with experts who have a high rating on a service like Angie’s List. It knows where you live, of course. It knows you own a house. The bot would then find the email for the best candidates and send out a message on your behalf. It would then answer the responses back from contractors and pick the best one. It would add the meeting to your schedule during a time when you could probably meet.

I don’t think the Pixel 2 will go this far, but I don’t think it’s impossible today. We’re all craving a bot that can do more work for us, answering email or placing phone calls. We even want bots that talk to other bots — say, sending our bot to talk to the Pizza Hut bot on Facebook.

In the end, it’s really all about iterative improvements and making an AI more relative to what we need, able to do work on our behalf, and much more intelligent. My hope is that Google keeps leading the charge with more contextualization … and more AI power.