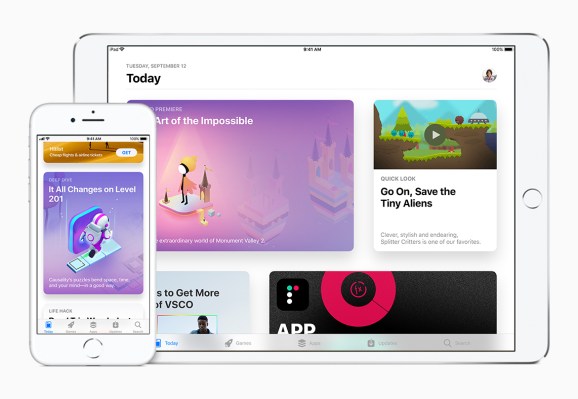 Thanks to iOS 11, iPads are one step closer to killing off laptops. It’s only a matter of time before that happens, but until then, you do have to know what you are getting yourself into. For now, the best time to treat Apple’s iPad as a laptop is when you are in an office. As I found out, it’s not while you’re at a coffee shop.

On the basic model, the 9.7-inch iPad, I installed iOS 11 and started experimenting with the latest features, which are mostly designed to boost productivity (at least on the iPad). There’s a new dock, which makes it much easier to find commonly used apps. (Siri even plays a role here, tracking the most commonly used apps and storing them on the dock to the right.) There’s a cool multitasking view that lets you copy and paste elements from one section of the screen to another using Split View. In one case, I dragged a YouTube video over to iMessage and it inserted the video into my chat. That was cool.

I really like the Files app. I’ve been wanting a way to manage my files — mostly Word docs and photos — on the iPad because, as a journalist, I’m always trying to keep my projects straight. It was great being able to search for a slideshow by name and see exactly where it is located. The Files app also searches on services like Box and Dropbox. I had to send back an iPad Pro I was using for testing quite a while ago, but I’ve also noticed Apple keeps improving the Pencil. In iOS 11, you can tap on the lock screen and start jotting down a note.

So what is not quite there yet? What did I still miss while I was tooling around at the coffee shop?

For starters, you can improve the operating system on an iPad, but until the apps become much more powerful, you’ll probably still need a laptop. I liked managing my photo files on the iPad, but when an editor asked me to do a quick adjustment to an image of a car, taking out what looked like a smudge, I really wished I had the full desktop version of Photoshop. And, there’s one photo-related step that is still not quite right on the iPad — it was tricky to adjust the aspect ratio and pixels for an image. I do use web apps like Pixlr Editor in a browser on Chrome, and that works in a pinch, but I like Photoshop.

What about documents? The Files app makes it easier to manage my files, although most of them are on Google Drive and that app has been around for a while. And the Google Docs app works fine for me. However, there’s still a workflow problem. For starters, when I write using a laptop, I usually open a ton of tabs with new documents. Again, that’s possible on the iPad, but a mouse works better when you have six tabs up on the screen. With my finger on the 9.7-inch screen, it felt like something was still wrong — like I was on a tablet, not a laptop.

There’s a litany of other problems, and Apple knows all about them, I’m sure. Even though the A11 Bionic processor is supposedly faster than a MacBook, it’s not like I’m going to be playing Ark: Survival Evolved on the iPad anytime soon. Video editing is functional using apps like iMovie, but let’s get real here — you need a mouse, more graphics power, and a better workflow. On a Windows laptop, I can edit an entire 10-minute video using a lot of drag-and-drop, fine tweaks to clips, and layered audio channels. That just won’t happen on an iPad in the near future.

Surprisingly, even with these caveats, the iPad 9.7 with iOS 11 seemed like a big jump forward. I could see myself doing some drag-and-drop on a plane, typing or even dictating documents in a hotel room, and making use of the new dock to access my apps faster. The iPad is still mostly a “viewer” for movies and books, but it’s also great for email and documents. In the end though, I doubt I will be ready to leave the laptop behind unless the apps start working more like their desktop counterparts.