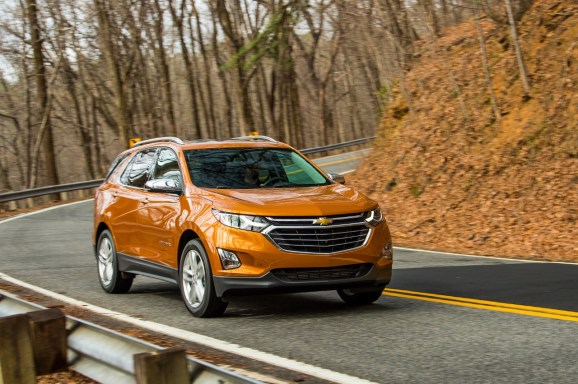 I wasn’t sure what to make of the teen driving features in the 2018 Chevy Equinox. The car — sporting a new design and quite a powerful 2.0-liter turbo engine — is something that looks like it will transport the groceries from Aldi’s supermarket quite nicely. But in reality, it can merge into traffic as quickly as any normal sports sedan I’ve tested recently, maybe with even a little more punch. (If you don’t believe me, please do a test drive. I’ll be happy to compare notes. And if you have a teenager who will borrow this car at any point, let’s also discuss.)

The issue for me is not really about helicopter parenting or trust. It’s not even about monitoring your teen. Ask any parenting expert about things like a kill-switch for your kid’s smartphone and you’ll hear a lot about communication — about talking through your concerns as much as possible.

Keeping that in mind, the Teen Driver feature — which I tested extensively for a week — is a useful starting point to help teens understand what the car can do and what dangers exist. It runs on the touchscreen display. To activate it, you place the keyfob in the cupholder between the seats (really) and then register the key. There’s an RFID chip and a reader under the cupholder, but feel free to tell your teen driver it is automotive magic.

When the teen drives with that key, the Teen Driver features kick in. There’s a warning that pops up if the teen speeds. You can set a speed limiter (to 85 MPH) so that the Equinox will not go over that speed. (The gas pedal sort of pushes back.) When the teen starts driving, the radio won’t play until the car senses that the seat belts are fastened — in other words, it’s no fasten, no Demi Lovato for the under-18 crowd.

But that’s just the beginning. Again, I’m a big fan of communication when it comes to teens. The report card feature runs in the touchscreen, and when you as the parent jump in to drive, you can pull it up and see how many miles the teen drove, their top speed, and even whether the forward collision warning features kicked in (which is a sign of tailgating). The car I drove was one step down from the top-end Premium trim that has the collision warning, but everything else worked.

The Teen Driver system is a carryover from previous models, and the tailgating features are from last year, but I like how they are all implemented in the newly re-designed Equinox, with a nice and subtle gray interface that pops up in the dash above the steering wheel and on the touchscreen. You can set the radio so that it won’t go over a certain volume, which is pretty much a gift to the neighborhood and all of society in general. I didn’t like that the Teen Driver features are only in the car and not in an app, because if there’s a speed warning, I’d love to see that pop up in my email or on my phone — as it does today with the Verizon Hum and other gadgets.

Importantly, these features are all about safety. The Equinox is surprisingly fast, which makes it a little tempting for a teen to speed (no fault to Chevy on that one). Sometimes, it’s all about the teen knowing that these features exist, even if you don’t always throw down the gauntlet when they make a newbie mistake like going over the speed limit a little (that would sound like you’re nitpicking and create resentment).

But if you have a teen driver, I recommend these features as a good conversation-starter.

And, to be honest, they could be a major selling point for parents who want to keep their teen drivers safe.