Woodman said the new camera also comes with advanced video stabilization so your videos don’t look shaky. It will be interesting to see if shareholders and consumers welcome the new product, as GoPro has had a bumpy ride since becoming a publicly traded company in 2014. While its stock debuted at $3.5 billion in June 2014, it is now trading at market capitalization of $1.6 billion. During the last couple months, however, the stock has been on the rise.

Woodman made the announcement at the planetarium at the California Academy of Sciences in San Francisco. He showed footage of GoPro enthusiast videos on a gigantic screen.

“If ilfe is a culmination of experiences, the moments are gone all too fast,” he said. “We celebrate the moment.”

Woodman also unveiled Fusion, a waterproof, mountable 5.2K spherical camera and introduced new mounts and accessories for its Karma drone, which has a new Follow mode. The whole mission is to make it easy to live your moments and share them with your friends and family.

Fusion has two lenses, one in the front and one in the back. It lets you capture all angles, and it stitches them into a single 360-degree image. It has stabilization built into the camera. It also has “overcapture,” a way to enable cool shots for 2D screens. You can re-capture the exact perspective you want and then share that perspective as a 2D video. The resulting video makes it look like you have a professionally edited video — all done by yourself. The Fusion sells for $699.

“Fusion is a great example of the camera innovation happening at GoPro,” he said.

You can mount a camera on an extension pole to get a picture of you, and then the software deletes the extension pole from the image, so it seems like someone is shooting you from an impossible angle, Woodman said. 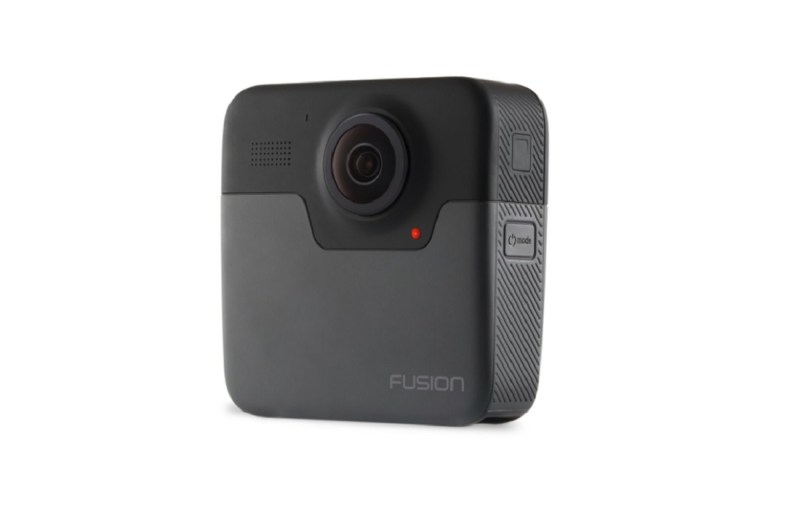 The Hero6 has better dynamic range and low-light performance to really make images pop, Woodman said. And it uses a GoPro custom-designed GP1 processor. It also has three times faster offload speeds via 5GHz Wi-Fi networking and is waterproof to 33 feet deep.

The Hero6’s GP1 uses computer vision and machine learning to analyze scenes and sensor data for improved automated narratives, dubbed QuikStories. GP1 has double the performance of previous processors. The GoPro can automatically transfer video to your phone, and you can use the GoPro app to automatically edit it. It’s easy to capture moments and put them into slow motion, allowing you to “see your life in a whole new way,” Woodman said.

The Karma drone is compatible with Hero6 Black, and it can now automatically follow you around, keeping you framed in a shot. It lets you get aerial shots of yourself as you’re living your active or (in my case) not so active life. The Karma and the Hero6 sell together for $1,199.