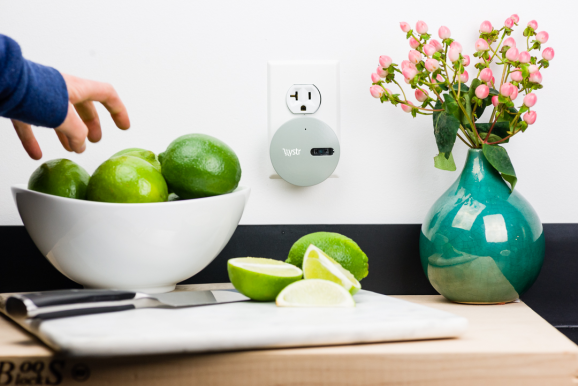 Gadgets that have one specific purpose are becoming more common. Amazon recently made an alarm clock that’s intended for making video calls (and waking you up). There’s a wallet that’s specifically designed to block RFID signals. A posture detection device can tell you when you’re not sitting up straight. Now, there’s a new voice-enabled product that can help you remember to pick up eggs and milk on the way home from work.

The Lystr is still in development, but it looks like it has a chance. You plug the gadget into a wall outlet in the kitchen. When you need to remember to get something, you just scan the barcode. The device automatically creates a shopping list of those exact items. For a more generic list, you can also activate the device by voice: “Hey Lystr, remember the bananas.”

“I got started with the project after I got my MBA in 2015,” says Kara Scanlin, the Lystr CEO and cofounder. “My background is in financial services and a little bit of risk management. I was never entrepreneurial or intending to go that route, but this was a problem for me — maintaining a grocery list. I couldn’t figure out why I was using a scrap of paper and felt like this mundane process of maintaining a grocery list could be easy to automate.”

Scanlin says she “socialized” the idea and formed a team of fellow MBA students way back in 2015. She started the company in the middle of 2016 and recently launched a Kickstarter campaign to help them develop and start manufacturing the product.

For voice, the Lystr is “always listening” and can add items you identify by voice, although it doesn’t respond to other messages or let you juggle your shopping list around.

The most obvious competitor is the Amazon Dash Wand, which also scans products and, because it is Amazon, can automatically send them to you by mail. Scanlin claims the Amazon database is not that extensive, and the Dash Wand obviously is intended only for scanning and shipping products that Amazon actually sells. In contrast, Lystr is store agnostic. Since millennials will shop for groceries at up to six different stores, she says, the product is a better fit.

“Our app lets consumer create different lists — such as Walmart or Kruger — then filter items based on where you get them and organize them by aisle, such as produce and cereal and baked goods. We have a robust platform that matches consumer demand,” she says.

The Lystr is sold through Kickstarter on an early bird special for $79. It will cost $99 on Kickstarter and $119 as a normal shipping product next year.