Spotify has launched a mobile app specifically to help artists, their managers, and members of their entourage manage the artist’s presence on the music-streaming service.

Spotify for Artists launches today on iOS only, with an Android incarnation following shortly.

By way of a quick recap, Spotify for Artists launched back in April as a rebrand of the company’s existing Fan Insights initiative, which was introduced in 2015. Notably, Spotify for Artists ushered in a bunch of new controls that allowed artists to not only garner access to data, but to specifically manage their presence on Spotify. 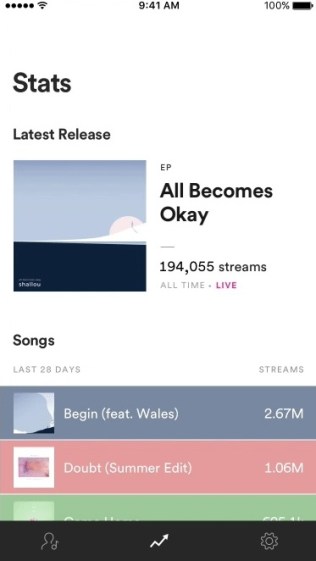 Above: Spotify for Artists: iOS

Through the app, artists can update their public profile — including biography, picks, and playlists — from their phones. They can also view real-time data on the number of listens their new music racks up after it’s released, as well as demographic information that breaks down who is listening to their tunes.

Spotify for Artists is the company’s first standalone app and represents part of its growing push to ingratiate itself with artists and labels ahead of a planned public listing in the near future.