With the introduction of voice-controlled speakers like Amazon Echo, Google Home, and the forthcoming HomePod, speaker company Sonos went from offering the most cutting-edge speaker features to lacking a component that had become par for the course. So when Sonos executives announced on October 4 that the company would finally be releasing its first voice-controlled speaker, the $199 Sonos One, the news felt overdue.

But the long wait set the stage for another major announcement — that Sonos One would add Google Assistant support in 2018, making it the first major smart speaker to support multiple voice platforms. Additionally, support for Apple’s AirPlay 2 will be coming to all Sonos devices in 2018.

The ability to support multiple voice platforms revealed a key advantage Sonos has in the era of Amazon Echo and Google Home: As a company that is not tethered to an internally developed voice control platform, Sonos can stay ahead of the game by making its competitors’ platforms available to Sonos owners. However, this means Sonos is locked into using platforms that were not originally designed for its users.

The remaining question, then, is how the Sonos One fares when delivering an experience that was first optimized for another device. 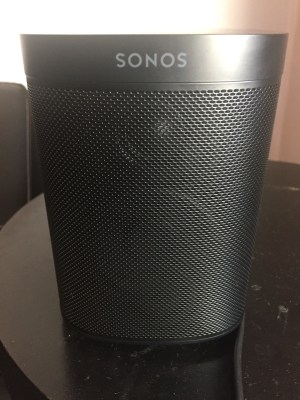 The Sonos One looks nearly identical to the Sonos Play:1, though the company says the speaker has been “built from the ground up to deliver a voice platform for multiple voice services.”

For reference, I’m a first-time Sonos user and had no other smart speakers to connect to my Sonos One. To understand what it’s like to connect existing Sonos speakers to  Alexa, read this account by my colleague Chris O’Brien. Because I did not have to connect my Sonos One to any other devices, my setup was relatively painless, though it did take me several attempts to correctly tune my speaker.

The speaker setup is done entirely in the Sonos app — except when it’s time to add in Alexa, which has to be authorized through the Alexa app. I would have preferred to do both through an “Alexa for Sonos” app, but I understand that Amazon and Sonos are expecting consumers to connect speakers from each of their respective companies.

The interface for the Sonos One has been redesigned, with traditional buttons replaced by a smooth touch control system. You can tap the volume icons to increase or decrease the volume, swipe to skip a track, and graze your hand over the microphone icon to turn off voice control — a helpful feature if you’re trying to play music while multiple people are talking. 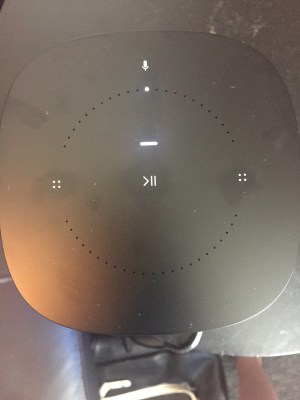 Above: The Sonos One Interface

One complaint is that the volume icons aren’t immediately recognizable — they’re the square icons on either side of the play/pause icon. The icon on the left turns down the volume, and the icon on the right turns it up. But after just a couple of minutes, I found the interface slick and easy to use.

The sound quality is what I expected from Sonos — powerful, without blowing my ears out (my landlady, who told me to keep the noise down when I dropped a box too loudly, did not knock on my door once during the four consecutive hours that I played my Sonos One).

The six-microphone array picked up my voice from every room of my admittedly small two-bedroom apartment. Whether I was listening to a soft-spoken radio host or a power ballad from a Broadway show, the sound was clear and rich.

The speaker really shines when you ask Alexa simple questions while playing music, such as retrieving the weather forecast or a shopping list. Alexa intelligently lowers, or “ducks” the music, so that both Alexa and the song remain audible. 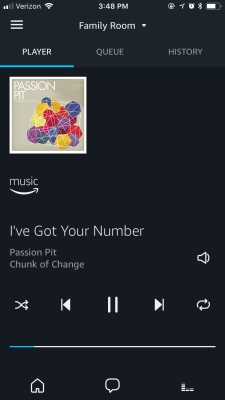 Above: Song selection and volume can be controlled in the Alexa app. The Sonos One has to be set up through the Sonos app.

Yet the Sonos One underscores that while voice control is convenient, it doesn’t always provide an optimal listening experience.

Admittedly, waiting 12 to 15 seconds for the correct playlist to load is a small price to pay for the convenience of voice control. But Sonos has long prided itself on creating speakers that deliver top-notch audio with a top-notch experience. And with Google’s $399 Home Max and Apple’s $350 Home Pod both scheduled to be available later this year, Sonos will face stiff competition. As it did with the Play:1, Sonos is attempting to pitch consumers on purchasing two Sonos Ones in order to “pair them” and create a stereo sound. So realistically, a consumer who is considering purchasing Sonos One in lieu of a Home Max or Home Pod would shell out nearly $400.

What Sonos will need to do to stay ahead of the competition, I believe, is develop features that keep the sound quality pristine and the operation painless in a voice-controlled world. One simple feature that’s on my personal wishlist is the ability to “lock in” to a playlist in the Sonos app once it’s been selected, so that Alexa only recognizes one- or two-word voice commands, like “skip,” “pause,” “next,” or “volume up/down” — removing the possibility that someone might accidentally trigger Alexa to switch playlists. Of course, Sonos’ ability to do so is hampered by the fact that it is relying on third parties to deliver voice control.

Finally, one of the most perplexing drawbacks of the Sonos One is that it does not yet currently support voice control for Spotify — a Spotify spokesperson says that this will be “available soon, likely before the holidays.” But it serves as yet another sign of how slow Sonos can be to finalize integrations — and with such formidable competitors, Sonos can’t afford to lag behind.

Do you like Sonos? Do you like Alexa? If yes, your choice is clear — the Sonos One is essentially a marriage of existing products. As a first-time Sonos user who has yet to invest in a smart speaker, I’m tempted to shell out the extra $70-$100 and invest in a Sonos One instead of choosing between a Google Home or an Amazon Echo. For the foreseeable future, Sonos One also offers the added benefits of being the only smart speaker to support multiple platforms from Apple, Google, and Amazon — even if those integrations sometimes take a while to come to fruition.

If you are a big entertainer who is in the market for a new speaker that will serve as the crown jewel of your entertainment system, it’s worth waiting to see how the Home Pod and Google Home look. But Sonos has proven that it’s here to play in a smart speaker world. The Sonos One is currently available for preorder, with a delivery date of October 24.