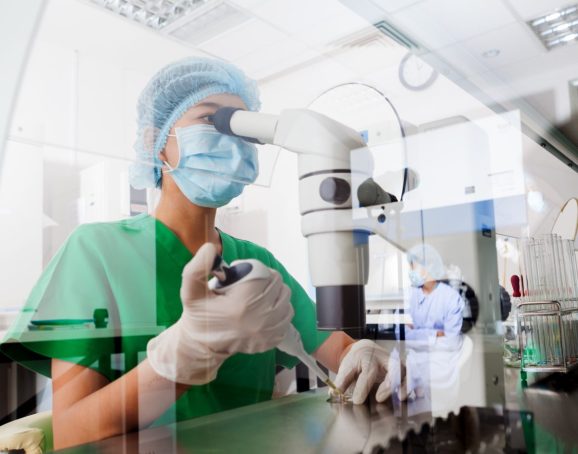 In May, Sundar Pichai, CEO of Google, discussed AI applications for digital pathology in his keynote speech to an audience of millions at Google’s annual I/O event. Five weeks earlier, the FDA announced it had approved the first whole slide imaging system for primary diagnostic use in pathology. Both events point to the future of pathology and laboratory medicine: Software will soon dominate.

Over the past 20 years, software has taken over the world. Retail was dominated by Amazon, Netflix put Blockbuster out of business, and Uber used software to take over the taxi industry. The one space that has yet to see a large software disruption is health care, with pathology as a prime example of an industry that has changed only minimally over the past hundred years.

Of course, there are skeptics who say things like “Tissue is and will always be physical” or “A computer could never capture the complexity of cancer the way a human can.” There’s truth to all of these statements, yet software is already starting to find its way into the core functions of pathology, signaling a paradigm shift in the way cancer is diagnosed.

Pathology is one of the final frontiers for software disruption — the gold standard is still human beings using microscopes to diagnose disease by assessing physical tissue fixed on physical glass slides.

Pathology is potentially the most powerful field of medicine. It is often the first place for definitively diagnosing a disease. As a consequence, a vast majority of decisions made with regards to patient care — up to 80 percent to be exact — are influenced by pathology. For the same reason, it’s also potentially the largest contributor to the $750 billion problem of misdiagnosis facing the health care system.

Pathologists are extremely well trained, and they’re experts at recognizing the patterns hidden in tissue. However, even the best pathologists make mistakes, and oftentimes there is only a subjective best guess, with no quantitative answer to lean on. The result: uncertainty in diagnosis and, consequently, treatment for patients.

Until recently, software had little role in pathology. Slides are made of glass, and thus the field has been largely relegated to the physical realm. But major players in the health care space are driving the adoption of whole slide imaging systems, hardware that generates massive images of tissue by scanning slides.

Laboratories converting glass into pixels are ahead of the curve. They’re not doing this because the monitor is inherently better than the microscope, but because software speaks in the language of pixels. That’s why digital pathology is so profound. There’s a world of cancer information that’s been sitting in file cabinets, stuck in glass. Only software has the power to bring the trillions of pixels of tissue that have been scanned down to a level humans can put to use.

The effects of the digital transformation of pathology are potentially enormous, with a few key things you need to remember. First, we will see a simple yet all-encompassing redesign of laboratories and their workflows, taking established best practices and moving them into the digital realm. Alternatively or in conjunction, there will be a set of medical innovations enabling pathologists to provide insight into questions that currently have limited answers. Questions such as “Will my cancer spread?,” “Will my cancer come back in five years?,” and “What treatment will work best?” are answered today by rough correlations provided by expensive molecular testing, with a limited set of information. In a similar manner as genetics, digital pathology promises to generate a new wealth of information tightly correlated with the questions that matter most in cancer diagnosis and care.

Health care and technology leaders have been driving the digital transformation of pathology for 15 years. So why is it just now picking up speed?

As recently as five years ago, digital pathology was a novel field big on promises and short on applications to drive a positive return on investment. Typical labs have to invest millions in scanners alone, and large file sizes (~1GB/image) mean that many labs would create petabyte-scale datasets per year, presenting major IT challenges and storage costs. Perhaps most immediate, though, were the regulatory restrictions — no digital pathology system could be marketed for primary diagnosis in the United States.

However, the first FDA approval of a whole slide imaging system for primary diagnosis in April 2017 spurred increased investment among other hardware vendors and sparked renewed interest in digital pathology for clinical use cases. Medical centers and commercial laboratories are starting to recognize that they must adopt digital pathology or be left behind. Early adopters recognize that, while advancements in hardware have enabled the creation of this digital ecosystem, it’s the software that’s driving value in adoption.

The increased adoption of digital pathology is coinciding with tremendous progress in the ability of computers to recognize complex patterns in images. For the laboratory, computational advances in pathology come in two forms, augmentation and automation, and they often go hand-in-hand. Advances in automation of traditional workflow processes enable pathologists to spend more time on tougher cases, and augmentation provides pathologists with insights about cancer the human eye can’t detect.

Software from companies such as Proscia provide a platform that enables much of the functionality expected from digital pathology, providing a backbone for digital pathology adoption while leveraging AI to power these transformations through automation and augmentation. Applications are diverse and plentiful, ranging from automating the classification of common cancers to finding otherwise unobservable correlations between cancer biopsies and clinically meaningful outcomes. Digital pathology is transforming cancer care, and in the next five years software will be fully integrated into cancer diagnostics and improving patient outcomes.

David West is chief executive officer of Proscia, a digital pathology platform that enables pathologists and researchers to leverage the pathology data in every slide using AI software and applications to combat cancer.