Today, the majority of humanity is faced with a constant stream of language. We receive an average of 80 plus emails a day. We can scroll through hundreds of tweets or Facebook updates in minutes. With a reported 10 hours daily spent in front of screens, never before have people had to contend with and sort through so much language.

No wonder the average click through rate for a display ad is an abysmal 0.35 percent. More surprisingly, an email campaign is considered a success if only 25 percent of an audience opens it. So what’s a marketer to do?

My team at Persado used machine learning to analyze content in thousands of marketing campaigns (comprised of tens of millions of unique messages), that garnered over 100 billion impressions. And we learned some amazing things in the process about emotion, emojis, and more.

We found that marketing language can be deconstructed into five major elements: emotional (there are 15 emotions for marketing), functional (calls to action), descriptive (the product or service being offered), formatting (stylistic elements like all caps, bolding, and emojis), and positioning (structure of the message). One of our major findings has been the contribution of emotions to message engagement. The role emotions can play, even in something as seemingly benign as an SMS text, should never be underestimated. The numbers bear this theory out: on average, emotional language is far more effective than any other language element in driving a response.

Here’s the average contribution of message elements to performance across all channels:

We can further categorize emotion language into the following groups: 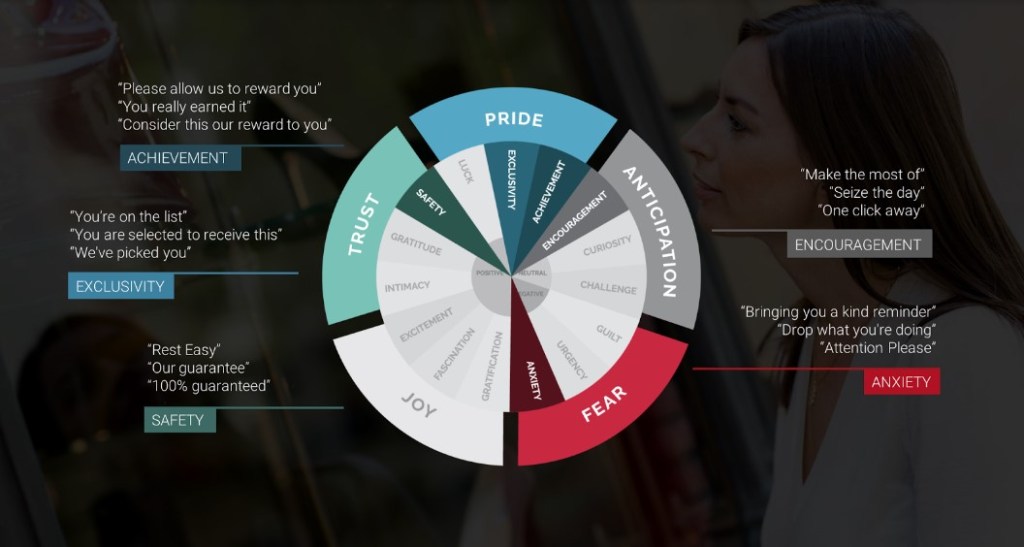 But it is not as simple as finding your emotional angle and sticking to it. Emotions differ by channel:

Even between these closely related channels, we’ve seen wide variation in the emotions that provoke response. Emotional efficacy also changes over time, due to a range of factors such as changes in audience responsiveness and our capacity to explore more language. 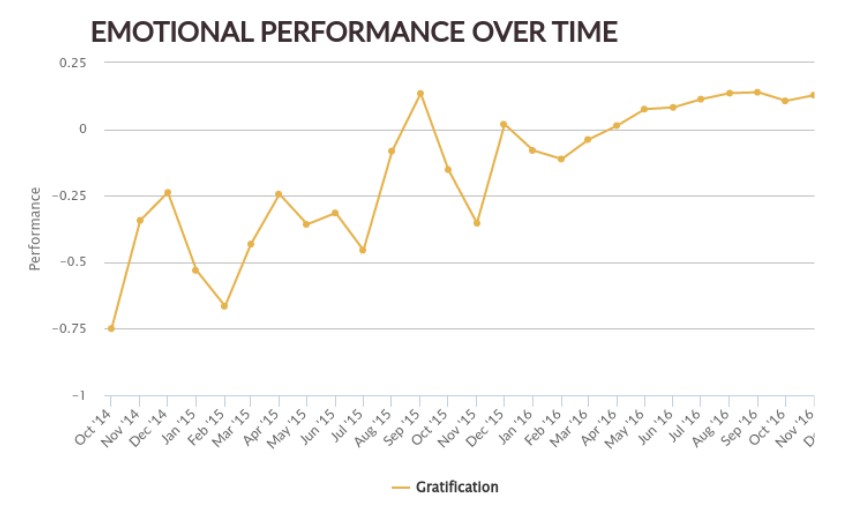 More than a feeling

But emotional elements are only one part of the equation. Call to action language (Click Here, Enter Now), choices around text placement, and even emojis can make a difference.

The average contribution of message elements for landing page channel:

In one case, we tested the language for a financial services landing page looking to convince consumers to sign up for a new credit card offer. We tested the headline, the descriptive text about the offer, and the call-to-action text. We even went so far as to test the formatting of the call-to-action. 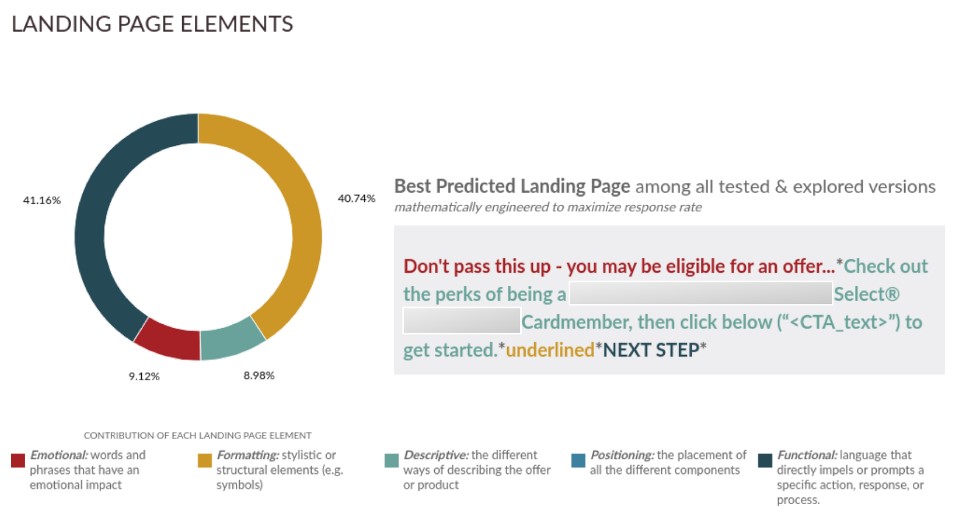 Test results showed that the call-to-action itself (Functional) and putting it in italics (Formatting) contributed the most to driving response. Emotional language contributed only 9.12 percent to clicks, and Descriptive elements even less at 8.98 percent.

If Helen launched a thousand ships to cause the Trojan War, a simple smiley ;) has probably launched just as many relationships in this modern day and age. An innovation of our digital world has been the introduction (or reintroduction, depending on who you ask) of symbols into everyday correspondence, including but not limited to what are commonly called smileys, emojis, and other ASCII symbols. Far from ornamental, these symbols can make a difference if we understand their efficacy and where and when they can help.

Results are not always obvious: the heart symbol, for instance, does not help brands drive more engagement around Valentine’s Day. We’ve tested it (both <3 and pictographic variations) in more than 600 scenarios and determined that consumers don’t respond to that particular symbol.

The future of words

A few words or symbols can make a huge difference in inspiring consumers to act, no matter what stage of the lifecycle they’re in.

As machine learning and AI gain a better grasp of language, larger elements of language will be subject to analysis and optimization. In the near future, UX copywriting may be tailored specifically to each user to make the experience more delightful. And Alexa, Siri, and other voice interfaces may know to speak to me differently than they do my mother. Perhaps we will see customized articles or entertainment pieces, written in the way you love with the type of humor that can get you to laugh. On a more practical note, it is easy to imagine website copy custom-generated to the emotional triggers and language that resonates most with any individual shopper.

Ryan Deutsch from my team at Persado will be talking more about using AI to optimize on language and emotions at VBSummit in Berkeley tomorrow.

Alex Vratskides is CEO of Persado.