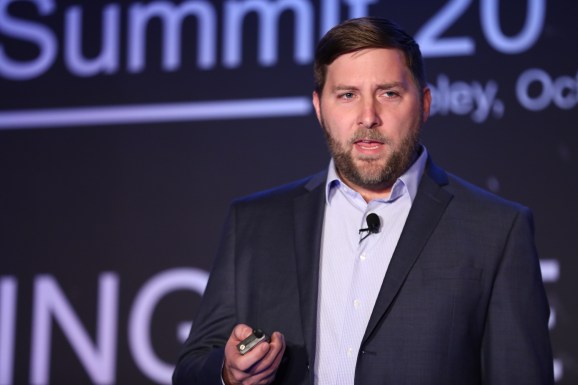 Garrett Tenold, a senior director for product management at Amplero, discusses the company's product at VB Summit 2017 in Berkeley, California on October 24, 2017.

Amplero, a marketing technology company that uses artificial intelligence to fuel one-on-one customer interactions, is updating its software to let companies bring their own machine learning models to the mix. This way, companies with their own data science teams will be able to import models that are built with other technology, in addition to accessing learnings from Amplero’s product itself.

The software will then collate the insights from the home-built machine learning models that companies bring and apply its own abilities for modeling many different customer interactions at the same time to provide businesses with better insights. That makes Amplero’s software — which is already ingesting data from CRM systems and other sources to provide its existing recommendations — significantly more useful.

The technique that Amplero started with is known as multi-armed bandit experimentation, after a problem in which a gambler has to pick which slot machines to play. Letting companies bring their own models will help customers expand what they use the system for.

“In the past, we had positioned ourselves around multi-armed bandit experimenting instead of next-best-action systems, but the truth is sometimes running a single model to answer a single question makes sense,” Steven Dunston, the vice president of marketing at Amplero, said in an interview with VentureBeat. “With this ability now for us to incorporate that into Amplero, we think it’s a win-win for our customers.”

The expansion builds on existing functionality in Amplero’s software that lets customers export insights from its software so that they can be analyzed and used elsewhere.

“We don’t want to be a black box,” Dunston said. “There is a lot of concern about, ‘Okay, I’m having this machine make some decisions about how we interact with our customers. How can I see what’s going on inside?'”