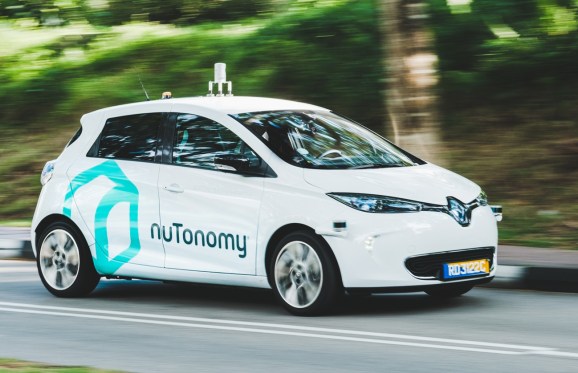 Delphi Automotive, one of the world’s largest automotive parts manufacturers, has announced plans to acquire fledgling autonomous car startup NuTonomy in a deal pegged at $450 million.

Founded out of Cambridge, Massachusetts in 2013, NuTonomy spun out from the Massachusetts Institute of Technology (MIT) to focus on self-driving vehicles and mobile robots. The company has raised around $20 million in funding, with notable investors including Samsung Ventures, Highland Capital, and Signal Ventures. NuTonomy had previously revealed plans to launch a fully commercial autonomous vehicle (AV) service in 2018, while last year in Singapore it beat Uber to launch the world’s first public self-driving taxi service.

U.K.-based Delphi is no stranger to self-driving car tech, and it has actively been working with Intel on some autonomous vehicle smarts, as well as recently investing in lidar startup Innoviz Technologies. Back in 2015, it snapped up Carnegie Mellon spin-off Ottomatika, too.

The NuTonomy acquisition will give Delphi access to 60 autonomous cars across three continents when the deal closes, which is expected to by the end of 2018. NuTonomy will continue to operate from its base in the Boston region, where both companies already operate Automated Mobility on Demand (AMoD) pilot programs.

“Our mission has always been to radically improve the safety, efficiency, and accessibility of transportation worldwide,” noted NuTonomy cofounder and CEO, Karl Iagnemma. “Joining forces with Delphi brings us one step closer to achieving our goal with a market-leading partner whose vision directly aligns with ours.”

Today’s news comes hot on the heels of a number of acquisitions across the self-driving car realm. Back in March, Intel announced it was paying $15.3 billion to acquire computer vision firm Mobileye, while GM boosted its self-driving car credentials with the acquisition of lidar startup Strobe.