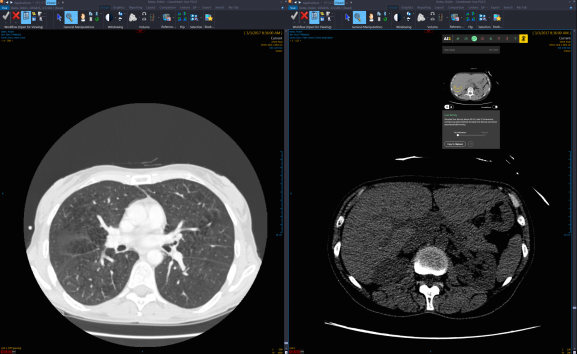 We hear a lot these days about how AI is changing the marketing technology landscape, helping us sell products and services in the 21st century. But during my two-week journey through Israel’s startup scene, it was a medtech company that struck a nerve with me — a deep learning imaging analytics startup called Zebra Medical Vision.

Using AI to recommend related products, build a million split tests, or determine the optimal time to push a discount voucher may be effective from a marketing standpoint, but these applications are hardly life-changing. And they wouldn’t have helped save my dad’s life. He passed away from lung cancer in February this year, and there is a good chance that an early and accurate diagnosis could have given him a better chance at beating “the big C.”

Zebra’s technology is making it possible to catch misdiagnosed diseases, early-stage cancers, and other life-threatening ailments, and the company today announced a significant change in its business model that makes its AI-powered medical scan recognition for hospitals more affordable. Starting today, each scan will now cost just $1 and will make use of all 11 of Zebra’s detection algorithms.

How does it work? Using data from millions of high-quality scans, Zebra has developed a deep learning engine that can automatically detect various medical issues, such as liver, lung, cardiovascular, and bone disease.

And new capabilities are constantly being released, including detection of breast cancer, lung cancer, brain trauma, and hypertension. Importantly, as new algorithms are developed, Zebra will roll these into the $1 per scan plan, making the service more effective over time.

“We provide the ability to create a more complete, comprehensive, and quantitative report, and we also allow quality assurance and reduced variability between physicians,” Elad Benjamin, CEO and cofounder of Zebra, told me. “In pilots that have run at various institutions, we have seen that findings discovered by our algorithms such as compression fractures go unreported nearly 60 percent of the time, and findings such as coronary calcium and emphysema approximately 30 percent of the time.”

That’s significant, and the algorithms help health care professionals not only make the right decisions but make them faster than before. At $1 per scan, diagnosis is cheaper, too. This means Zebra’s technology can not only reduce health care costs in developed countries, it can also be the catalyst for adoption in countries that traditionally haven’t been able to afford comprehensive radiology facilities.

In the past year and a half, Zebra has raised $12 million, bringing its total funding to $20 million. Founded in 2014 and headquartered in Israel, the company has been named a top 5 global AI company (FastCompany) and a top 50 AI Leader (Fortune) and has won the Social Impact Award by Nvidia.

The company’s analytics engine is deployed at over 50 hospitals globally and has analyzed more than 1 million patient scans to date cross North America, Latin America, China, India, and Europe. Zebra has also partnered with Intermountain Healthcare to deploy enterprise imaging analytics across the Intermountain organization.

So what comes next for Zebra, and how does it see the future of AI in this field?

“We believe that radiology and other visual medical domains will undergo a fundamental shift in how they’re practiced over the next few years,” Benjamin said. “Automated tools will also be able to incorporate additional clinical information and patient history to recommend more precise followup treatments and diagnoses.”

Zebra’s AI technology is available in participating countries via hospitals and health care institutions, with more details available via its website.