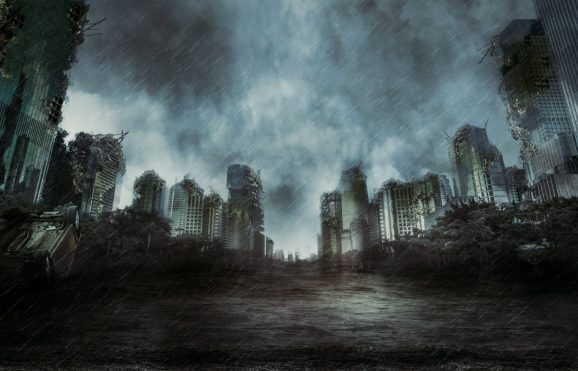 The coming advent of super-intelligent AI has some of the greatest minds of our time crying apocalypse.

Stephen Hawking co-authored an article on the topic which darkly quipped that “success in creating AI would be the biggest event in human history—unfortunately, it might also be the last.” Bill Gates has likewise voiced concern.

Elon Musk famously called artificial intelligence our “greatest existential threat” and issued a letter (along with Stephen Hawking, Steve Wozniak, and hundreds of others) warning that AI could be more dangerous than nuclear weapons, and he’s been doing a lot of hand-wringing again lately.

In a recent address to an assembly of U.S. governors, Musk warned that AI needs to be regulated before it’s too late. “I keep sounding the alarm bell, but until people see robots going down the street killing people, they don’t know how to react, because it seems so ethereal,” he said.

We’re talking about super-intelligence, Musk. Not a Transformers movie.

The statements got a lot of play in the media when Mark Zuckerberg addressed them over a live Facebook Q&A. Among other things, he said, “I think you can build things and the world gets better, and with AI especially, I’m really optimistic. I think people who are naysayers and try to drum up these doomsday scenarios are—I just, I don’t understand it. It’s really negative, and, in some ways, I think it is pretty irresponsible.” He goes on to talk about all of the benefits that AI will deliver, citing improvements to healthcare and self-driving cars.

Musk was quick to dismiss Zuckerberg, calling his grasp on the subject “limited.”

Well, my grasp on the subject is not limited. And I think Zuckerberg has it right. In fact, I think he’s being conservative. The advent of super-intelligent AI will not signal the demise of humanity. In fact, instead, it might signal the dawn of a more ethical, less destructive human race.

AI will keep us honest

The first major point in my argument is this: defining what is ethical for AI will go hand-in-hand with redefining what is ethical for humankind. While this exercise has been attempted many times on a philosophical or existential level, this kind of practical application has never been possible. As we define the rules of the game for AI, we will be forced into playing by them ourselves, as the resulting AI will help hold us to our own standards—it will be omniscient and omnipresent, and nothing will escape it. Crimes will be harder to commit because all information about everybody and everything will be known and accessible.

AI will eliminate our inherent biases

If living in a world governed by omniscient, omnipresent AI sounds like a dystopian nightmare, let’s just stop for a moment to consider the systems we currently have in place. People all over the world are subjected to the effects of corruption, despotism, poverty, anarchy, and persistent terrorism.

Here in the first world, we have police forces that maintain law and order. But because they are comprised of un-aided human agents susceptible to bias and even prejudice, they fall devastatingly short of protecting all citizens equally.

Take, for example, the United States. The U.S. has a staggeringly high rate of incarceration: 22 percent of all the world’s prisoners are here, even though the country accounts for just 4.4 percent of the world population—and of those, more than a third are African Americans, even though they account for just 13 percent of the population. Furthermore, African American drivers are 31 percent more likely to be stopped by the police than Caucasian drivers, and African American people are twice as likely to be searched during routine traffic stops than Caucasian people.

AI could fix that.

It is already within the power of scientists to create an AI that is less biased than a human counterpart by appropriately selecting training samples or what the AI is exposed to. With this AI at their side, police will be forced to abandon their own intentional or unintentional biases and find the real “bad guys,” regardless of age, gender or race.

AI will right our environmental wrongs

AI surveillance may sound creepy, but saving endangered species with AI definitely, doesn’t. There are many different ways in which this is possible, and there are several applications already afoot. For example, loading up drones with AI might prove to be the most effective way to keep poachers from slaughtering elephants and rhinos in Africa.

AI may well save us from ourselves—from preventing war and traffic accidents and making healthcare more affordable to finding lost children. AI has the potential to be super-intelligent without any of our inherent human flaws. Despite what Musk predicts, AI can be leveraged any number of ways for the greater good, and the applications that might result are countless.

Max Versace is the CEO of Neurala, a deep learning neural network software company, and founding director of the Neuromorphics Lab at Boston University.