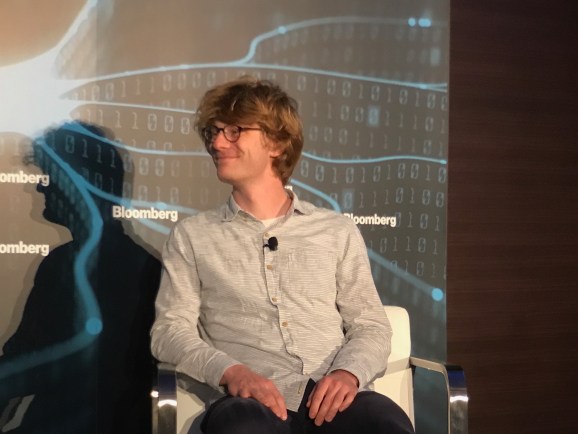 Salesforce Research unveiled a new technique today that’s supposed to speed up machine translation using AI by doing away with one of the historical limitations of those systems. Instead of translating word by word, the system will now generate whole sentences at once.

The approach massively accelerates the process of machine translation compared to the current state of the art. Speeding up intelligent predictions is important, since users lose interest as systems take longer to generate results, and twiddling one’s thumbs while waiting for an AI translation can be a frustrating experience.

Richard Socher, the company’s chief scientist and one of the authors of the paper, announced the news at Dreamforce today in San Francisco. He said that efficient machine translation would be important for tasks like automatically localizing documentation.

In the past, neural networks doing machine translation would take a sentence in one language, then generate a sentence in a second language one word at a time. That was important because the system needed to know what the previous word was in order to ensure maximum accuracy. (It’s similar to how humans translate language, for that matter.)

Salesforce’s new approach generates a sentence in parallel, which enables faster translation. Actually pulling that off took a great deal of work. For example, if two words in one language match one word in another, translating each word in parallel could lead to a nonsensical sentence. The team behind the paper instituted a “fertility” function first laid out in a 1990 paper from IBM.

That function’s role is to predict how many translated words will result from the origin sentence. After that, the system can go through and use that as a road map for generating the sentence in parallel. In the most accurate version of the resulting system, it actually runs through several different translations, and then uses a traditional translation system to score which one is the most accurate result.

Overall, Salesforce’s system is less accurate than the state of the art machine translation system that it uses to teach the neural network laid out in this paper. However, the resulting process is significantly faster, even as more tasks are added to improve accuracy.

What’s more, the paper says it’s possible to get additional performance improvements by throwing more hardware at the problem.

All of this is part of Salesforce’s ongoing push to build additional AI capabilities to help its customers through the company’s Einstein portfolio of services. It comes on the heels of a pair of AI announcements yesterday aimed at helping companies create intelligent bots and generate custom predictions based on data stored in Salesforce.