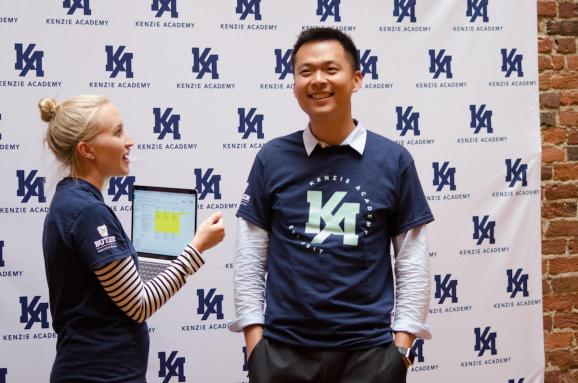 Today, a tech apprenticeship school called Kenzie Academy announced that it has raised a $1.6 million seed round from investors that include 500 Startups, as well as edtech venture capital firms Rethink Education and LearnStart.

Kenzie Academy was launched earlier this year by Chok Ooi, the former CEO of staffing firm Agility.io; Galvanize cofounder Rehan Hasan; and Courtney Spence, cofounder of advertising agency CSpence Group. Headquartered in Indianapolis, Kenzie Academy has developed an experiential curriculum that aims to “retrain many of the workers in the American heartland toward new economy jobs,” according to a company press release.

The company will be launching its first “cohort” of 24 students this January. They will participate in an initial six-month program that will train all of the students to become junior front-end developers. A Kenzie Academy spokeswoman told VentureBeat that students can complete the program in six-month increments, and that, ideally, students will participate in the program for two consecutive years. For now, the program is in-person, in Indianapolis, though the company does plan to offer online courses in the future.

Tuition starts at $12,000 for the first six-month program. For the next six-month program, a full-stack web developer track, tuition also costs $12,000, but students who go through the first cohort can earn a $4,000 tuition subsidy if they complete 10-20 hours of consulting work per week. The following track, a 12-month software engineer program, costs $24,000, but students can earn a full $24,000 subsidy if they continue with part-time consulting work. Kenzie Academy’s website says that at this point, students will “also get paid an additional hourly stipend for consulting work,” but that “the hourly rate is to be determined.”

Kenzie Academy’s launch comes at a time when a number of the early entrants in the coding bootcamp space have shut down, including Dev Bootcamp, which offered a 19-week coding course, and the Iron Yard, which offered 8-12 week programs. Kenzie Academy’s pitch is that its more intensive, hands-on curriculum — which is all project-based and doesn’t include lectures — will better prepare students for real-world tech jobs than many previous programs.

Other project-driven competitors include San Francisco-based Holberton School, which offers a two-year program, and 42, which has a three-to-five year program.

One aspect of Kenzie Academy’s approach that is unique is that it is focused on the Midwest for now.

CEO Ooi has roots in Indianapolis, having attended college there, but he told VentureBeat in an email that Indianapolis was selected “due to its emerging tech scene, high demand for jobs, great talent pool, and high potential for cultivating a need among existing tech companies.” According to Ooi, there are currently over 2,000 tech jobs that will need to be filled in and around Central Indiana. This is primarily due to the Indianapolis expansion of Salesforce, which acquired Indianapolis startup ExactTarget in 2013 for $2.5 billion, and the May announcement that Indian IT giant Infosys will be leasing office for up to 2,000 tech employees.