Apple’s new smartwatch with cellular connectivity is proving to be a hit with consumers. As a result, Apple is once again the market leader for wrist wearables.

According to the latest report from Canalys, Apple shipped 3.9 million smartwatches in Q3 2017. The new Apple Watch Series 3 was only on sale the last 10 days of that quarter, but it apparently still had a big impact on sales.

Xiaomi and Fitbit shipped 3.6 million and 3.5 million wearable bands, respectively, an increase from the previous quarter for both.

However, it’s important to note that Xiaomi and Fitbit primarily sell basic wearable bands. Apple almost completely dominates the smartwatch category at this point, with no other company even a close second.

That’s bad news for Xiaomi and Fitbit because, despite their overall growth, Canalys said the wearable band market dropped 2 percent to 17.3 million units shipped in the quarter. This was due to big drops in sales of basic wearable bands.

“Strong demand for the LTE-enabled Apple Watch Series 3 has dispelled service providers’ doubts about the cellular smartwatch not appealing to customers,” said Canalys analyst Jason Low, in a statement.

In some ways, Apple’s performance was even more impressive because supplies of the new watch were limited, meaning demand was stronger than the number of shipments indicates. Basically, Canalys believes carriers massively underestimated the demand for the cellular Apple Watch. Yet it still estimates that Apple shipped 800,000 cellular-enabled units in the quarter. 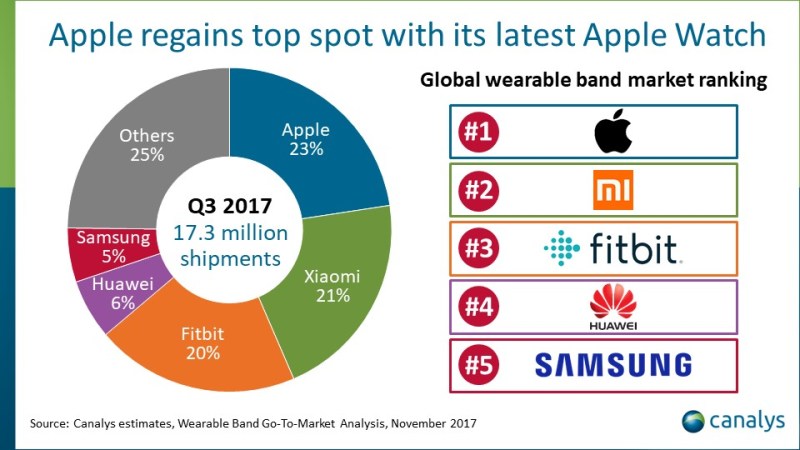