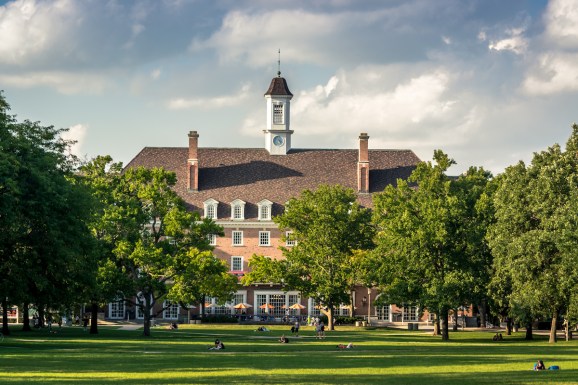 University of Illinois at Urbana Champaign

As Chicago’s innovation scene continues to grow, tech employers should have plenty of fresh talent to choose from, according to a new report, which shows the number of local STEM graduates, and computer science grads specifically, is skyrocketing.

The report, published today by the Illinois Science & Technology Coalition and LinkedIn, shows that Illinois is now the second largest producer of computer science graduates in the country, awarding nearly 10 percent of the nation’s computer science degrees. And from 2012 to 2016, Illinois rose from 43rd to ninth when ranked among states who had the highest number of STEM field graduates overall.

In 2016, Illinois institutions produced more than 40,000 STEM degrees, representing 31.8 percent of all of the state’s graduates, outpacing the national average, which is about 28 percent. Among those STEM degrees earned last year, 3,300 were earned in computer science.

“With an increased focus on cloud computing, big data, IoT, and mobile computing, the importance of computer science talent in the economy continues to grow,” according to the report. “Those with computer science skills are some of the most sought-after members of the workforce, with around half a million computer and information technology jobs expected to be added nationally by 2024.”

Additionally, there’s a diverse pool of students earning STEM degrees in Illinois. About 50 percent of the degrees earned were by international and immigrant students.

“Illinois’ economy is in a unique position to capitalize on foreign-born talent,” the report states. “The strength of Illinois’ universities, especially in STEM, attracts students from around the world. The share of STEM degrees awarded to nonresident students is far higher in Illinois than nationally.”

But are there enough tech jobs for all these recent grads? The outlook is better than it has been. STEM jobs in Illinois generally lag behind the national average, but according to the report, the state is taking steps to close the gap. Over the past five years, Illinois has been adding STEM jobs at a rate that is outpacing the national average. Computer-related jobs specifically have increased 5 percent annually, according to the report.

The study also showed software engineers in Chicago often stay at their jobs longer than in other regions. Of course, the city loses some of its talent to other tech hubs like San Francisco and Seattle, but Chicago retains more of its computer science talent than other cities, keeping about half of them. Illinois’ largest employers of computer science students who graduated from an in-state college include Nokia, Allstate, State Farm, and Discover.