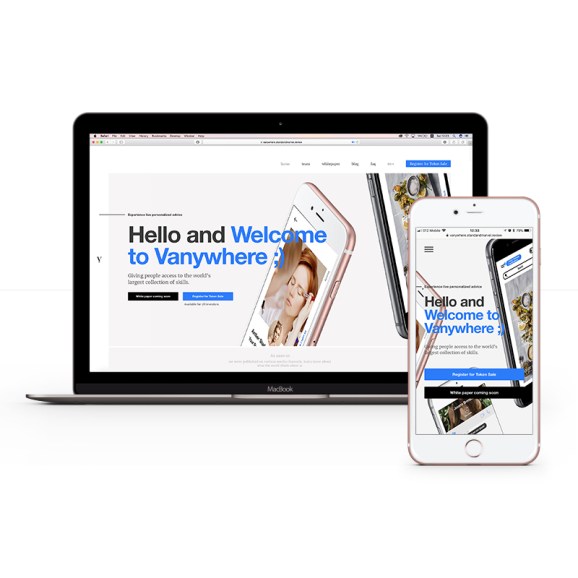 Blockchain technology is everywhere right now, and it feels like virtually every industry is ripe for disruption.

Today, Vanywhere — a skill sharing solution that lets anyone with a marketable skill capitalize on their knowledge — has announced the launch of its platform, which is underpinned with blockchain technology.

Of course, there are lots of ways people can share skills right now. Several marketplaces exist for this purpose, and beyond the likes of Amazon’s Mechanical Turk and Skillshare, there are millions of instructional YouTube videos for those looking to pick up new skills. Why is Vanywhere a viable alternative?

“Vanywhere is different than other platforms in that it’s the only one that provides you with live, 1-on-1 interactions,” Rami Shechter, CEO and founder of Vanywhere, told me. “When a user connects with a ‘skiller’ (that’s what we call the people offering skills on Vanywhere) they get the skiller’s full attention.”

That is different from many skill sharing platforms, which tend to rely on passive learning rather than an active interaction with the provider.

“The experience is interactive, personalized, and specific to their needs,” Shechter said. “In Q1 2017, we ran a pilot in Apple Tech Support and found that users loved that they could connect with personalized tech support over video chat. They reported that they solved their issues much faster when speaking with a skiller than through watching online tutorials, and [they] enjoyed the human interaction and personal touch.”

That test campaign generated 26 percent conversion from download to action, and Vanywhere claims it became the largest live video provider of Apple tech support in the world during its pilot.

So what does blockchain technology offer here?

“Vanywhere is a mainstream product that could have run without blockchain,” Shechter said. “However, the inclusion of blockchain takes the platform to the next level. Through blockchain, we can also build an ecosystem and an economy based on our token. Blockchain has allowed us to remove the dependence on third parties, like credit cards and payment gateways, enabling us to lower our commission and facilitate micropayments.”

The Vanywhere platform covers a wide range of topics and competencies, from fashion styling to understanding cryptocurrencies, local restaurant recommendations to art.

So instead of leaving you to wonder whether that blog post recommending the best restaurants in Lisbon was actually written by a local, Vanywhere lets you speak directly with a resident and has created an economy that rewards the skiller’s knowledge.

How does Vanywhere determine the skill level and suitability of the skiller, and how will it guard against inappropriate behavior?

“To become a skiller, people need to fill out an application which will be reviewed and approved by other members of the Vanywhere community,” Shechter said. “Community members receive guidelines to follow and are rated and rewarded in VANY tokens for approving qualified skillers. As part of the ecosystem, it behooves them to only authorize qualified skillers in order to preserve the quality of the platform that they’re a part of. Should there be any inappropriate behavior or disputes, they can be reported and investigated through our dispute mechanism.”

What’s next for the platform, and what will the initial coin offering (ICO) funds be used for?

“Our token sale in Q1 2018 is the next thing on the horizon,” Shechter said. “Funds raised from the sale will be used to further build our brand. One of the first verticals we’re launching with is cryptocurrency. Throughout the past several months, we’ve received a lot of interest from people in the crypto space [who want] to be skillers, so we will continue developing that vertical and others.”