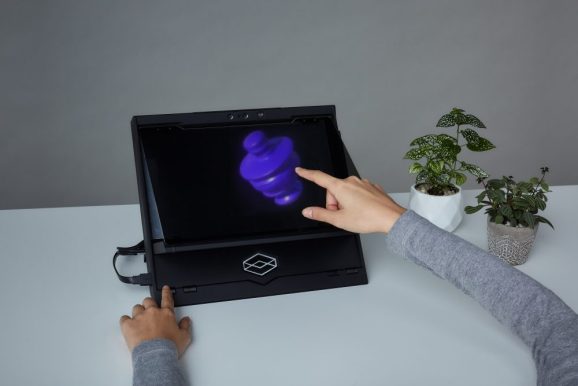 Holoplayer One works with interactive holograms.

Microsoft likes to think of its HoloLens mixed reality headset as projecting holograms into the real world, but these can only be seen by the person wearing the headset. Looking Glass Factory’s Holoplayer One is making holograms that everyone can see and interact with.

Holoplayer One is an interactive lightfield display. It consists of a device that unfolds from a shape similar to a laptop and projects a 3D image above a glass panel that anyone can use their hands to interact with. In the trailer below, for example, you can see it being used to create 3D art not dissimilar to VR applications like Google’s Tilt Brush, only in the real world.

Lightfield technology is an increasingly promising means of capturing real-world objects and scenes and digitizing them with realistic results. Over the past few years we’ve seen hugely promising work in this field from companies like Lytro that may one day deliver photorealistic VR. Holoplayer One, though, wants to share those results with everyone.

“Think of a lightfield as all the rays of light coming off of an object in three dimensions,” Looking Glass Factory CEO and cofounder Shawn Frayne told UploadVR in an email. “Our eyes are light sensors, not reality sensors, so if you could somehow recreate all of the rays of light coming off of a bunny and put all those rays in the middle of a room, everyone in the room would think that a soft, fluffy bunny is floating in the middle of the room — it would be visually indistinguishable from the real thing.”

With Holoplayer, you’ll get a full 3D image without the need for any special glasses or headsets. The projected image, first transmitted from an LCD screen, hovers above the box itself. The images presented has a resolution of 267-by-480 per view with 32 different views displayed simultaneously. Describing exactly how it works is best left to Frayne.

“First, we take a 3D scene and ask the question, if this scene was here in front of me, what’s the light doing as it comes out of the scene? What does the scene look like from all angles?”

From there, the LCD screen works with a customized lenticular lens array to create a partial light field of the given scene that appears in 3D when you stand in front of it.

“We have an LCD screen right in the middle of the virtual world, which we’d bump into if we try to reach into our screen, so we use an optical technique called re-imaging to copy the pattern of light coming off of our LCD screen/lenticular setup and redisplay it in midair,” Frayne adds. “That’s what we use the retroreflective material and a beamsplitter to do, to move the original superstereoscopic image above the Holoplayer itself.

“Now, we can reach all the way through our virtual scene without hitting anything, setting the stage for interaction. The details of how the reimager works are really neat, but they’re hard to get across with just words. There’s a more thorough explanation with some visual aids on our site for anyone who’s interested.”

The interaction part is a little simpler; Holoplayer uses Intel’s Realsense depth camera to track the movement of fingertips, and that information is relayed to create the appropriate responses to the gestures and movements your fingers make.

According to Frayne, increasing the resolution of the image and the number of views is possible over time, though Holoplayer’s current specs are largely driven by cost constraint: “the most important thing to us is that we can get a unit out there that’s cheap enough to be accessible by individual creators,” he says. “We do have a larger and higher resolution lightfield display, and we’re continuing to push size and resolution in our prototypes. Get in touch with us if you’re interested in larger displays.”

So, is it cheap enough? Looking Glass is now accepting preorders for a Development Edition that costs $750 and ships in April. That requires a PC to actually run while, for $3,000, there’s also an appropriately-named Premium Edition with a built-in PC. Frayne says PCs need to be “mildly decent” to run the kit, noting that it’s worked well with PCs using i7 processors.

“We believe this type of interface will escape the dev kit vortex and become a non-dev kit product in 1-2 years,” Frayne concludes. “That may be a professional application, like an interface for 4D ultrasounds or for someone rigging models at Pixar, or it may be a consumer application. We believe that answer will come from getting these dev kit systems into the world as rapidly as possible.”