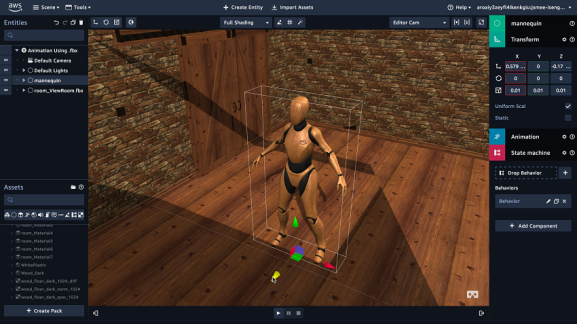 Amazon is jumping onto the augmented and virtual reality bandwagon with the launch of Sumerian, a new application that’s supposed to make it easier for people to develop 3D experiences for a wide variety of platforms.

The browser-based tool is available in limited preview today. At launch, Sumerian enables developers to put 3D models together in scenes for use in VR and AR applications. It includes an object library full of models that people can put to use, as well as support for importing assets from FBX and OBJ files.

On top of this, developers get access to a set of “hosts” — 3D characters that they can customize to interact with an end user. These hosts integrate with Amazon Polly and Lex to provide natural language capabilities similar to those underpinning the Alexa virtual assistant.

Sumerian is designed to be straightforward enough for developers who are new to building 3D experiences, while retaining the power needed to create engaging content. As more developers look to support AR and VR, and platform owners continue to expand what devices can do, Sumerian could help make AWS a key home for developing the applications of the future.

Sumerian also dovetails well with AWS’s ongoing push to attract game developers to its cloud platform. The company already released its own Lumberyard game engine, which is supposed to provide a substrate for people who are building interactive experiences.

Once users have built an experience in Sumerian, it can run on hardware such as the HTC Vive, Oculus Rift, and iPhone. Tara Walker, an AWS technical evangelist, said in a blog post that Sumerian will also support building AR scenes for Android devices that are compatible with ARCore in the near future.

Another upcoming key feature is the ability to import data from Unity projects. That engine is widely used among AR and VR developers, and providing a bridge between Unity and Sumerian could help attract developers.

This news comes as one of the first announcements out of AWS re:Invent, the cloud provider’s major conference in Las Vegas, Nevada. Stay tuned for more news from the show throughout the week.