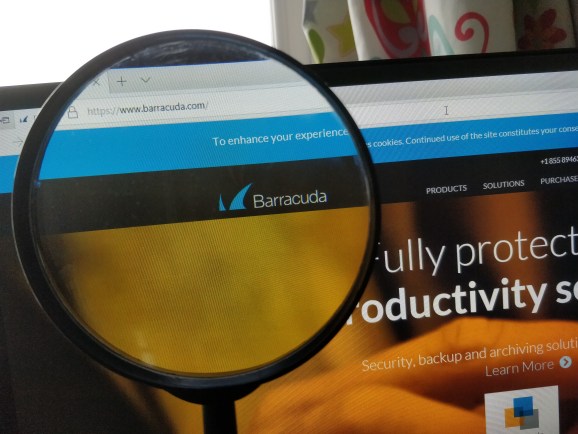 Private equity investment firm Thoma Bravo is offering shareholders $27.55 per share in an all-cash deal worth around $1.6 billion.

Founded in 2003, Barracuda offers a range of network and application security products aimed at companies operating in the cloud, along with email security, data protection, and storage products. The company claims more than 150,000 organizations use its services globally.

Thoma Bravo’s offer represents a premium of around 22 percent on Barracuda’s average stock price over the past 10 days, but just a 16 percent premium on Friday’s close. If Barracuda’s shareholders approve the buyout, the Campbell, California-based company will revert to being a private entity once more, “with a continued focus on email security and management, network and application security, and data protection solutions,” according to a press release.

“We believe the proposed transaction offers an opportunity for us to accelerate our growth with our industry-leading security platform that’s purpose-built for highly distributed, diverse cloud and hybrid environments,” noted Barracuda CEO BJ Jenkins, who replaced founding CEO Dean Drako in 2012. “We will continue Barracuda’s tradition of delivering easy-to-use, full-featured solutions that can be deployed in the way that makes sense for our customers.”

With the massive Equifax data breach still fresh in everyone’s minds and the cybersecurity workforce expected to be short nearly 2 million people by 2022, online security remains a hot industry for investment. Last month, cybersecurity risk-monitoring platform SecurityScorecard raised $27.5 million from the VC arms of some major tech firms, including Google, Nokia, and Intel, while Attivo Networks, Darktrace, and SentinelOne have all raised big, too.

And it’s against this backdrop that Barracuda is now the subject of such a major buyout. While the company hasn’t been doing amazingly well on the public market, it is operating in an industry that’s in big demand.

“Barracuda is a proven industry leader, consistently bringing powerful, comprehensive solutions to customers in an increasingly prevalent, hostile, and complex threat environment,” added Thoma Bravo managing partner Seth Boro. “We believe that Barracuda is at the forefront of innovation in several highly strategic areas of the cybersecurity market and are excited to be the company’s partner in the next phase of its growth.”

The transaction is expected to close before the end of February 2018.