RockYou Media is branching beyond social games with the launch of Vocally, a new digital property for multicultural millennial women.

The website is billed as a safe space to showcase unique perspectives of young women, and it will take advantage of RockYou’s existing base of 75 million monthly users, said Lisa Marino, CEO of RockYou, in an interview with VentureBeat.

Vocally uses RockYou’s existing RYME platform (RockYou Media Engine), which is the underlying base for its social and mobile games. Marino said that for RockYou has been working on Vocally for about a year. She explained that it came out of the acquisition of influencer marketing firm FanBread, which RockYou bought in August 2016.

FanBread had the makings of the platform, which is a vehicle for original stories, art, illustrations, editorial, and video. Some of the content will be created and curated by Vocally’s recently hired team, and some will be created by the users themselves, Marino said.

“It’s an extension of what we have been doing,” she added. “We are actively running games and still expanding that. We’ve made investments in non-game media, and with FanBread we gained the ability to create content.” 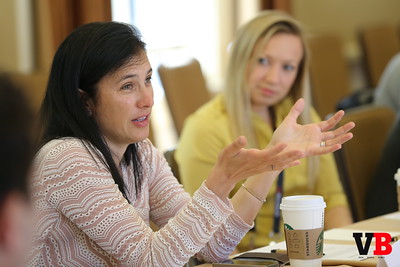 Above: Lisa Marino, CEO of RockYou, at the GamesBeat Summit.

RockYou Media operates an ad network that it uses to monetize its social and mobile games. And it already reaches about a third of all online millennial women, Hispanics, and African Americans. After launching Vocally, RockYou will move on to publish other kinds of media sites and take advantage of its growing network of users for both games and non-game content. A Hispanic-focused site will debut in 2018.

“It’s a digital-first platform that can apply to any content,” Marino said. “We are starting from the beginning, and we think there will be demand for this.”

Marino believes the timing is good for building a community, since women’s issues and multicultural topics — from the Women’s March to sexual harassment — have been in the news for the past year.

“We’ve been so ready to showcase RockYou Media’s newest property with the public,” said Rachel Gariepy, lead editor of Vocally, in a statement. “From the women’s march to Black Lives Matter to #metoo, this past year has given rise to the urgency of making women’s voices heard. Vocally’s platform is created for these unfiltered discussions, deeply personal reveals, and eccentric anecdotes told through fresh perspectives.”

Marino added, “This is very close to my heart as a female and a Hispanic. We are bringing a voice to people who haven’t had one — females and minorities, or both. Our demographic is exactly that. It’s a diverse group of people.”

“The traditional media is the competition here,” Marino said. “We have always been a media company for more than 10 years. This is about engaging our community.”