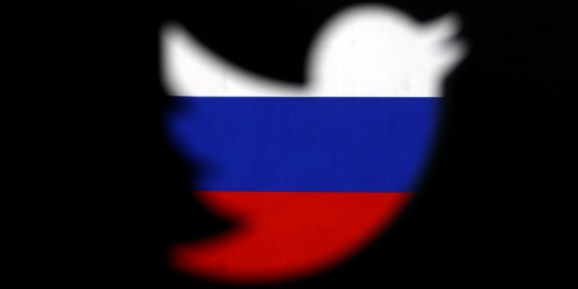 (Reuters) — What began as a grassroots online campaign featuring a schoolboy has grown into a mass hashtag protest against Russia’s exclusion from the Winter Olympics – backed by what appear to be fake Twitter accounts and users connected to past pro-Kremlin causes.

Many ordinary Russians are undoubtedly upset about an International Olympic Committee (IOC) decision to ban Russia’s team from the Pyeongchang games in South Korea early next year due to “unprecedented” doping violations.

However, this public sentiment has been amplified by apparently automated or semi-automated Twitter accounts known as “bots” and “trolls”, according to analysis of social media traffic by Reuters and a British-based security researcher.

Social media companies, including Twitter (TWTR.N), are under intense scrutiny in the United States where lawmakers suspect their platforms were used as part of an alleged Russian effort to sway the 2016 U.S. presidential election in favor of Donald Trump. The Kremlin has flatly denied the accusations.

President Vladimir Putin dismissed the IOC’s decision, made on Tuesday, as “orchestrated and politically-motivated”.

State media have in turn reported extensively on the protest movement around the “NoRussiaNoGames” hashtag, saying they are covering a public backlash just as any other news outlet would do and denying their work is orchestrated.

But researcher Ben Nimmo said that while much of the public support for Russian athletes online was authentic, the Twitter activity showed not all of it can be taken at face value.

“What we’ve got here is a small but genuine hashtag campaign, which is being exaggerated and amplified by Russian state propaganda outlets to make it look like the campaign is huge and an upwelling of popular anger,” said Nimmo, who works for the Digital Forensic Research Lab of the Washington-based Atlantic Council think tank.

The post included a video appeal from one of the banned skiers’ mothers, which was viewed more than 150,000 times.

Data for views and shares on VK is not publicly available. On Twitter though, the hashtag received little attention until the Olympic ban and garnered just under 1,700 tweets on Dec. 5 before the IOC announcement.

Nimmo said data he has collected shows bots and trolls then helped to drive that number to more than 9,000 in the hours following the decision.

One of the accounts identified by Reuters as driving activity around #NoRussiaNoGames was @ungestum, which lists its location as the Russian city of Orenburg. The account has sent 238 tweets consisting of just the hashtag to other users since the ban was announced, indicating that these were computer-generated.

But @ungestum has also sent tweets containing text in Russian written by a person. This suggests the account may be semi-automated, with both the user and a computer program able to operate it. Reuters was unable to reach the person or people behind @ungestum for comment on Twitter and no other contact information was available.

The campaign was also heavily promoted by a group of at least five accounts which tweeted the hashtag multiple times alongside links to unrelated Russian-language news articles, and repeatedly reposted tweets from each other.

One of those accounts, @03_ppm, has sent more than 275 such tweets in the last three days. @03_ppm, which like many of the accounts in the group has no identifying information and a profile picture of a woman’s cleavage, did not respond to a message seeking comment.

Reuters was unable to establish definitively that @ungestum, @03_ppm or any of the related accounts were sending automated tweets. But the volume and content of the tweets fits a pattern of behavior ascribed to bot accounts by the Oxford Internet Institute, a department of Oxford University.

State media outlets including RT, Sputnik and the Russian Defence Ministry’s Zvezda TV channel all reported on the campaign, saying it had gone viral, and the hashtag received multiple endorsements from Russian athletes and celebrities.

Presenters at Zvezda donned t-shirts with the slogan on air on the morning of the IOC decision, and the schoolboy and his father were interviewed by local media the next day.

A spokeswoman for RT said its coverage had not been influenced in any way. “A swell of support for this hashtag and campaign both domestically and internationally put the story not only on our, but clearly on your radar also,” she said. “Our coverage was not coordinated with anyone else‘s, news is news.”

Maxim Dodonov, deputy director of Zvezda’s news service, also said the channel’s coverage was not coordinated with other media. “The campaign is supported by millions of Russians and thousands of real users on the internet, both in our country and abroad,” he said in emailed comments to Reuters.

Sputnik’s press office said: “As an international news agency we respond to trending stories on social media and publish them in accordance with our editorial guidelines.”

The schoolboy’s father and the Russian Defence Ministry did not respond to written questions sent by Reuters.

One of the accounts tweeting the hashtag multiple times was operated by a person rather than a computer program, Reuters established, but this account – in the name of Oksana – has been associated with past pro-Kremlin campaigns.

The account has been active in campaigns praising Putin and attacking critics of Russia which were launched by the AgitPolk group. @AgitPolk is one of 2,752 accounts which has been identified by Twitter as tied to Russian operatives and suspended.

When asked why she participated in the campaigns, Oksana said: “I completely support our President V.V.Putin … and respond to all attacks in his direction with arguments.”

Oksana, who declined to give her family name or provide additional evidence of her identity, added: “How do you not understand that the more external pressure there is on Russia, the more united we are around our leader!”