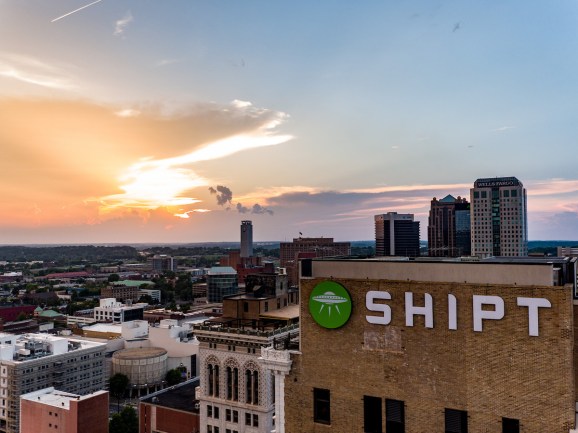 Target’s $550 million all-cash acquisition of online grocery delivery service Shipt on Wednesday may not seem large by Silicon Valley standards. But when you consider that it’s taken startups in Shipt’s home state of Alabama five years to raise that same amount of money, you can see why Shipt’s acquisition might be cause for celebration among some Alabama entrepreneurs.

“It’s one of our biggest successes, and we hope to build on that for sure. We’ve known our ecosystem has had all the right ingredients to fuel successes like Shipt,” Jay Brandrup, the president of Birmingham startup Kinetic, where Shipt is also headquartered, told VentureBeat in a phone interview.

Shipt’s success does give entrepreneurs in the state an example to point to when asked by investors if venture-backed startups can succeed in Alabama. But it’s too soon to say how much of that capital will get reinvested back into the system, given that Shipt’s two largest investors are based in New York and San Francisco.

Even when compared to other states in the Southeast, startup activity in Alabama is lagging. The state came in second to last on the Kauffman Foundation’s annual index of state-by-state startup activity. In particular, Alabama has one of the lowest rates of startup density in the country, at 64.3 startups per 1,000 employer businesses, compared to 90 in California.

The acquisition of a startup can help increase the availability of two resources in particular in a startup ecosystem — capital and talent. The local investors who see a large return on their investment can then reinvest that money back into other startups in the community. And the acquisition of a startup by a large Fortune 500 company can help attract more experienced, executive-level talent from the parent company to the region. But that’s all dependent upon if the acquiring company plans to maintain the startup’s headquarters.

Founded in 2014, Shipt had raised about $65 million in venture capital funding prior to its acquisition. Its $40 million series B round was one of the largest rounds raised by any startup in Birmingham, Alabama’s largest city. A source close to the company told Recode that Shipt was valued at $200 million earlier this year, which gives series B investors an approximately 3x return and series A investors a 7X return.

According to Crunchbase, three funds participated in both Shipt’s series A and series B round — Greycroft in New York, e.ventures in San Francisco, and Harbert Growth Partners in Birmingham. Taking money from coastal investors helped Shipt expand to enough markets to the point where it could be on Target’s radar. But these investors won’t take their money and reinvest it into more Alabama startups, as a local or regional investor would.

Rather, it will likely take more exits to help inject a meaningful amount of capital into the Birmingham startup ecosystem. There are signs, however, that the Shipt team is interested in finding ways to support other Birmingham startups. Shipt founder Bill Smith was an angel investor in a $1 million round for Birmingham startup Planet Fundraiser, for example.

The greatest benefits from the acquisition likely won’t be seen for several years, if Target chooses to expand Shipt’s presence in Birmingham — which for now, appears likely. According to a press release announcing the acquisition, Shipt will operate as a wholly owned subsidiary of Target, and it plans to keep the 270 employees in its San Francisco and Birmingham offices. Shipt, a rival to Instacart, is notable in that it started in the Southeast, and it has gained the most market traction in Midwestern and Southeastern markets. Presumably the market share was part of the appeal when Target chose to acquire Shipt.

The grocery delivery business, however, is a competitive one, and one that will continue to see consolidation over the next several years. Shipt will not have to just compete with Instacart, but also Amazon. Shipt’s customers pay $99 a year for unlimited same-day delivery from a variety of grocers, compared to $14.99 per month for Amazon Fresh members, who also have to pay $99 per year for an Amazon Prime membership. Target said in a press release that with its acquisition of Shipt, Target will offer same-day delivery for all major product categories, from electronics to home goods.

But if Amazon — which first offered same-day delivery to select Amazon Prime members in 2015 — continues to eat up more of the delivery market, Target can cut jobs in Birmingham just as quickly as it can add them.

Ultimately, the acquisition of a local startup by a household name like Target is a win for the city of Birmingham’s startup profile. But the acquisition isn’t quite big enough to ensure that the ecosystem gets the capital and talent it needs to support a greater density of startups.