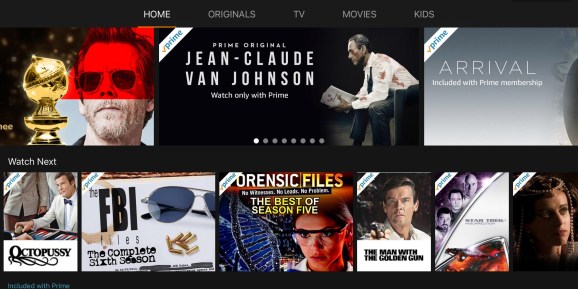 Netflix and Hulu may be bigger names in video streaming, but Amazon’s Prime Video service is building momentum: According to Amazon (via iPhone in Canada), the Apple TV version of Amazon Prime Video “had the most first-week downloads of any app in the history of tvOS.” The app offers subscribers unlimited streaming access to a number of “Amazon Original” shows, as well as a collection of movies and TV shows from other studios, similar to Netflix.

Years of pent-up demand for the Prime Video app likely helped Amazon’s cause. Until late 2015, Apple tightly controlled Apple TV app releases, offering only a handful of apps that were automatically added to every compatible device. After opening the tvOS App Store in 2015, Apple allowed any developer to submit user-selectable apps for download, but stifled some competitors by demanding a 30 percent cut of subscription services sold through Apple devices. Amazon balked at the demand, and responded by banning Apple TV sales through its popular online store.

Only in June of this year was the feud apparently resolved, as Apple announced at WWDC that a Prime Video app was headed to tvOS. Both companies remained unusually quiet on the app’s status during the September launch of the Apple TV 4K, and reports surfaced that the app had been delayed for unspecified reasons. Yet just in time for the holidays, the app launched last week with conspicuous support from Apple, including both active promotion in the App Store and a rare Apple TV title screen notification accompanying the latest tvOS update. Neither Apple nor Amazon has disclosed the app’s precise number of downloads, quantification that is not frequently shared by developers or Apple itself.

Amazon, for its part, allowed Prime Video viewing data to be integrated into Apple’s TV app, providing Apple with information on the programs and viewing habits of Amazon users. Netflix has so far refused to integrate with Apple’s TV app, while Hulu and a substantial number of smaller video services have cooperated.

Prime Video is best-known as included with Amazon’s Prime shipping service, but is also available as a standalone service for $9 per month. Apple TV will reportedly return to Amazon’s online store in the near future.