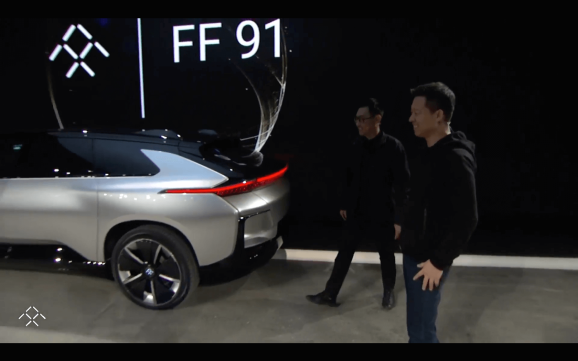 The Faraday Future keynote at the 2017 CES conference in Las Vegas.

The investment was announced at a December 13 employee meeting in Los Angeles, according to reports in the Chinese press. Former employees speaking to The Verge said the investment valued the company at $4 billion.

But there are no details of where the money is coming from, and the announcement has been greeted with skepticism from some corners. That’s mostly because Faraday Future, and Jia himself, seem to be in such a shambles. The investment was reportedly announced just one day after Jia was placed on a debtor’s blacklist by the Chinese government. He owes a reported $72 million, along with smaller amounts owed by units of his Chinese company, LeEco, whose own ambitious expansion plans have left it scrounging for capital and unable to pay some suppliers.

Faraday Future was initially positioned as a competitor to Tesla, but Faraday’s shaky finances and snarled relationship with Jia and LeEco have led to a string of problems. The first troubling signs came in January of 2016, when the company showed off a fanciful concept car — which did not operate — at the Consumer Electronics Show in Las Vegas.

More recently, Faraday has been losing executives at a blinding clip, and it announced over the summer that it would abandon plans for a $1 billion Nevada factory. The Verge recently published a comprehensive chronicle of the tumultuous saga, which lays much of the blame on Jia’s simultaneously overambitious and undisciplined meddling. The report also reveals that some Faraday employees have simply stopped showing up for work.

If any further indicator is needed, the Reddit forum devoted to Faraday Future is entirely given over not to anticipating a revolutionary product but to watching the company inch, as one poster put it, “one step closer to the deadpool.”

Automotive blog Jalopnik asked exactly the right question in response to the announced investment: “Who would buy into this company now?” Fortune has reached out to Faraday Future, which has so far declined to comment to other publications, for an answer.