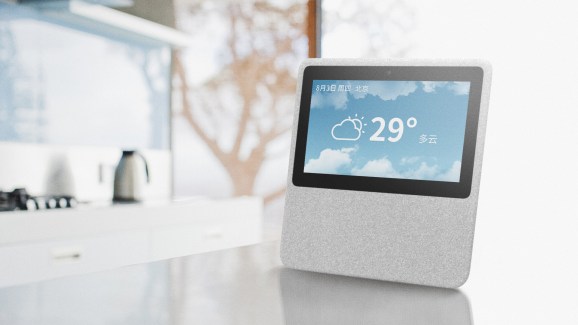 Baidu announced a trio of hardware products at the Consumer Electronics Show today that all connect to its Duer personal assistant, including a smart projector designed to serve the Japanese market.

All three of the devices work like smart speakers from other companies including Amazon and Google, providing customers with the ability to talk with a virtual assistant — in this case Duer, which is focused on the Chinese market. While these speakers aren’t necessarily meant for launch stateside, they show that Baidu remains an important force in the virtual assistant market that could go on to be more influential worldwide.

The Little Fish VSI Smart Speaker looks a lot like the Amazon Echo Show, with a display that enables video calls, media playback, and more. It’s connected to services like Baidu Search, the iQiyi streaming service (one of the largest in China), and a cloud photo album for families to display their snaps on the countertop.

Meanwhile, the Sengled Smart Lamp Speaker looks like what would happen if Amazon turned the top two thirds of its second-generation Echo into an LED lamp, while retaining the smart speaker capabilities. Its functionality seems like that of the GE C, a smart lamp that includes Amazon’s virtual assistant. The Sengled lamp can pulse its light in time with music and display a wide gamut of different colors, so people can set lighting that matches their mood.

Speaking of smart lamps, the PopIn Aladdin smart lamp includes Duer smart speaker capabilities as well as serving as a projector and smart lamp. It’s designed for Japanese homes, which are usually smaller. With space at a premium, it’s important to make every centimeter count, and this multifunction apparatus is supposed to help with that.

All of this hardware builds on the partnerships that Baidu has made with other companies like Huawei, Xiaomi, and Harman to build Duer into their products.