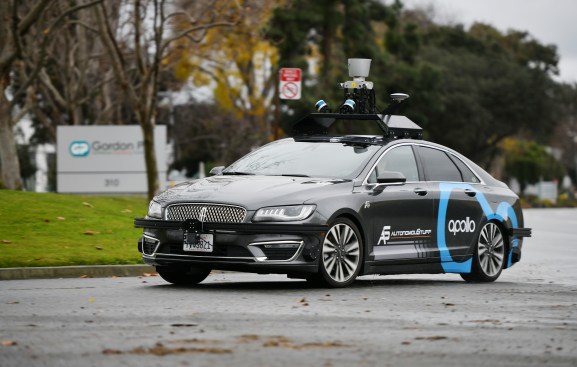 Baidu made a set of announcements today that are aimed at expanding the reach of its Apollo self-driving car software to better serve developers around the globe. The project has now reached its second major iteration, with support out of the box for creating cars that can drive themselves around basic urban roads. The announcement was made at the Consumer Electronics Show taking place in Las Vegas this week.

These announcements are part of Baidu’s push to reach beyond its dominant position in China to become a global powerhouse in the burgeoning self-driving car market.

Apollo 2.0, the software update unveiled today, is the second major version of an open source project that Baidu released last year. The new software now includes a full security system to make it easier for developers to securely update vehicles over the air. Other added modules include support for smoother rides, improved vision, and a system that can better determine where a vehicle is on the road.

Baidu’s Apollo Simulation Services, which make it possible for developers to test self-driving capabilities without having a car on the road, are now faster to start up. While the Apollo 1.5 simulator took at least 30 minutes to set up, the new simulator should take only 30 seconds to get up and running.

The Apollo Global Institute is supposed to promote the growth of Apollo around the globe by tying together Baidu’s talent in Beijing, Shanghai, Shenzhen, Silicon Valley, and Seattle.

Baidu is also expanding to Singapore with a new Apollo Southeast Asia Fund that will offer $200 million for strategic partners building on top of the software platform. It’s the first time the tech titan has expanded its reach to Singapore and is part of a collaboration between Baidu and Asia Mobility Industries.

Upgrades to Apollo are only some of the announcements Baidu made at CES this year. The company also unveiled a trio of smart speakers powered by DuerOS, the software platform behind its Duer virtual assistant.