Going way back to 2005, SDI Technologies off-shoot iHome built its home audio reputation off the back of the iH5 iPod docking station that doubled as a clock radio. More than 10 years later, iHome now offers a range of speakers and headphone systems for myriad use cases, among those a fledgling line of voice-activated radio alarm clocks.

Priced at $140 — $10 less than the iAVS16 — the iHome iGV1 sports many of the same features as the Alexa incarnation, including voice-controllable access to streaming services such as Spotify and Pandora. It can also be integrated with the broader smart home, meaning you could turn your bedroom lights on, activate your thermostat, or start up the coffee machine downstairs. 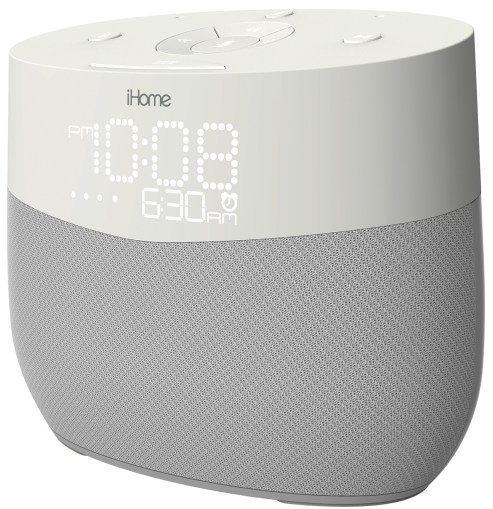 The iGV1 isn’t the first Google Assistant-powered smart speaker for the bedroom, as the recently launched $100 Insignia offers something similar with its always-on clock display. And it’s easy enough to configure the Google Home itself to serve as your bedside alarm clock. However, the iGV1 sports a good old-fashioned physical snooze button, similar to the Alexa-powered iAVS16. So if you’ve had a rough night and your voice is a little croakier than usual, you can just reach over and smack the top of the speaker to deactivate your alarm.

The iGV1 also comes with both Bluetooth and Google Cast functionality, giving you additional streaming options for your music, while a built-in USB port lets you charge any devices by the side of your bed.

The global smart speaker industry is projected to hit around $13 billion by 2024, and it’s clear that Amazon and Google are locking horns to corner the lucrative market, while Apple’s HomePod launch remains delayed.

To truly scale their digital assistants, the big tech firms have had to open up access to third-party hardware makers — the Google Assistant SDK launched for developers and device makers in the U.S. last April and was expanded to several more markets a few weeks back. It’s unlikely that Google would have launched an alarm clock with a snooze button on it, but embracing third-party manufacturers and developers means consumers will naturally get more choices.

“The smart home market is growing at an incredible pace over the next five years,” predicted Gary Schultz, director of product and business development at iHome. “Much of that growth is being fueled by the proliferation of smart home devices from brands like iHome that offer products that support popular smart home platforms like Google Assistant.”