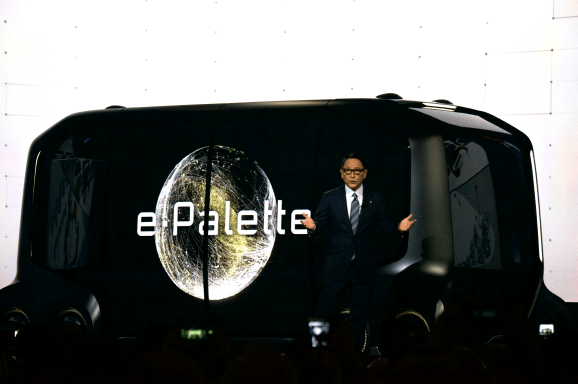 If Toyota has its way, the future of Burning Man would be a sea of autonomous, electric minibuses. The company showed off a new concept vehicle at this year’s Consumer Electronics Show that looks a bit like a rounded shipping container on wheels and is designed to be everything from an autonomous taxi to a food truck.

The multi-function vehicle, known as the E-Palette, is supposed to fit into a vision of the future where electric and autonomous vehicles are a key part of a city’s infrastructure. What’s more, CEO Akio Toyoda sees E-Palette vehicles as a way to bring on-demand retail space and restaurants to where they’re needed, whether that’s inside a city or at a festival in the desert.

“Just think of how great E-Palette would be at Burning Man,” he said.

(One can only imagine how the Burning Man crowd would react to the arrival of a shiny, autonomous electric bus, given the angst over tech luminaries bringing luxury dwellings to Black Rock City.)

To support its vision, Toyota has enlisted a raft of partners in an E-Palette Alliance, to bring the vision of that vehicle into reality. Toyoda said that his company has begun working with Amazon, Didi, Pizza Hut, Uber, and Mazda, among others.

Consumers shouldn’t expect to see one cruising the roads anytime soon, though. While Toyota plans to bring them to the 2020 Olympics, there doesn’t seem to be any direct path to commercial release just yet.

The Japanese carmaker’s announcement is part of its broader move towards augmenting vehicles with technology as a means of competing in the rough-and-tumble car market. Toyoda said on stage that he loses sleep about the work done by tech giants like Apple and Google in the automotive space.

Like last year, this year’s CES is chock full of carmakers who are looking to show off their latest innovations. Yesterday saw the introduction of the Byton concept car, while Hyundai, Ford, Kia, and others are yet to present their work.