Aromarest wants you to get a better night’s sleep through a combination of colors, scents, and sounds.

The company has debuted its sleep gadget, which includes an “insomnia buster” setting, at CES 2018, the big tech trade show in Las Vegas this week.

It has rivals such as Bescent, maker of Sensorwake, but Aromarest contends it has a smart device that addresses the entire sleeping and waking cycle. It promotes restful sleep and awakens you in a gentle way with scientifically tested techniques.

You can control the device, which comes with dimmable LEDs capable of generating 98 million colors, through a mobile app on iOS and Android. The insomnia buster setting provides a slow pulse of red light to help slow breathing and heart rates and make sleep come more quickly.

In addition to the light, the Aromarest has twin aroma-diffusing bays hidden within its lampshade that are compatible with any fragrance oil. One bay can be used at night with a scent like lavender for relaxation. The other can be filled with an invigorating oil, such as citrus or rosemary, and scheduled to turn on in the morning to help perk up the senses. 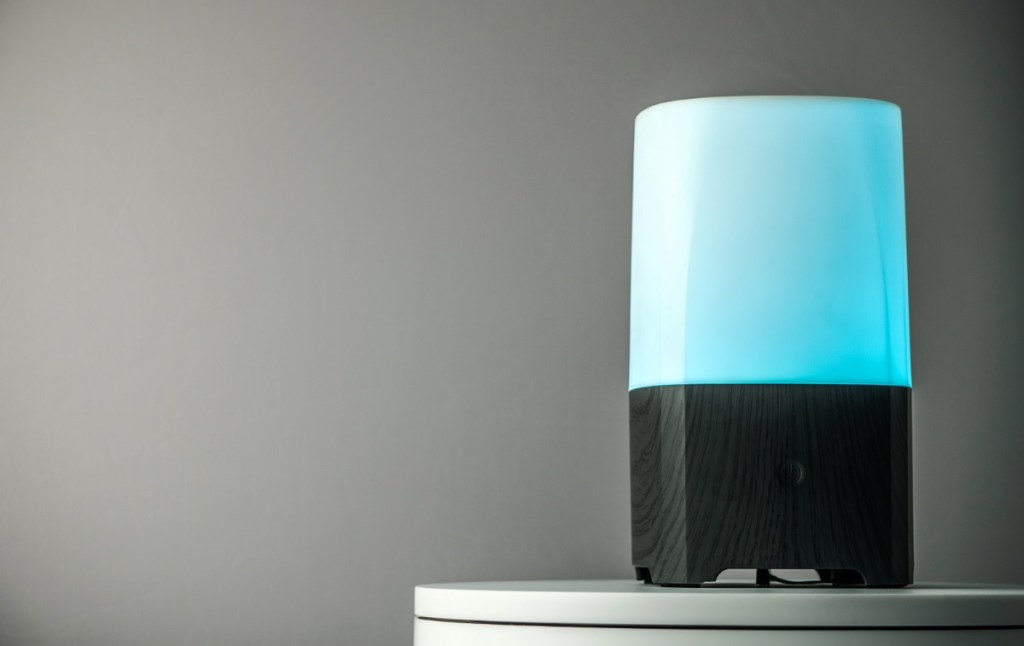 Above: Aromarest comes in yellow or blue.

The Aromarest’s third component is a high-fidelity Bluetooth speaker mounted on its underside, allowing sound to be reflected off a bedside table surface, resulting in an omnidirectional output that fills the room without seeming too close.

Users can select music from their own smartphone or pick from the built-in library, including the sound of ocean waves, falling rain, gentle brown noise, or wake-up tones.

“As our days get busier, it becomes harder to turn it all off at night and get much-needed rest,” said Derrin Hill, acting CEO for Aromarest, in a statement. “Between phone chargers and sleep-related gadgets, our night stands are crowded. We wanted to invent one device that would be an all-in-one, science-based solution, which is why we also built in two hidden charging ports.”

The mobile app not only controls the Aromarest but also tracks the user’s sleep and self-adjusts its light and sound outputs based upon how restful the night was. Aromarest is a graduate of the RevRoad Accelerator in Provo, Utah.