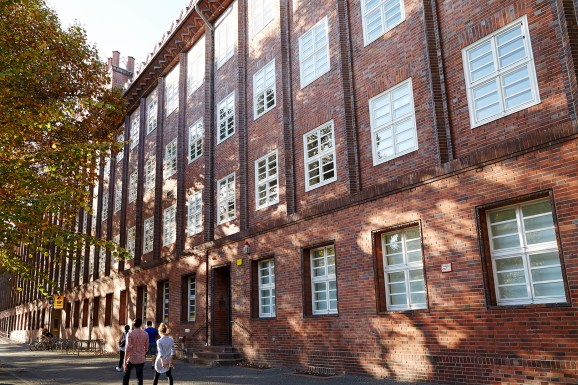 Full Node, the European Blockchain Hub in Berlin on Skalitzer Straße 85–86, in the neighborhood of Kreuzberg.

Beyond the massive speculative frenzy around cryptocurrencies, the underlying blockchain technology continues to attract an expanding range of entrepreneurs. This means various regions are now jockeying to become the key hub for a growing ecosystem of blockchain startups.

Berlin is one of the cities that believes it’s worthy of the crown, and it’s case will get a boost thanks to Full Node, a blockchain coworking space that will open in March in the city’s Kreuzberg neighborhood.

Full Node will have 1000m² of space in the building for a combined 100 people. Full Node will offer meeting rooms, open space, and social areas for events and work.

Nadja Beneš is head of brand and content strategy for Berlin-based Gnosis, one of the partners on the project.

“The community was really dispersed,” Beneš said. “We had a desire to unite this growing blockchain community.”

Following a year in which Bitcoin soared to insane valuations and initial coin offerings threatened to rewrite the rules of startup funding, a much broader audience is tuning in to subjects like cryptocurrencies and blockchain. And with money flowing into this sector, the number of cities and countries wishing to get in on the action has soared. Malta, Singapore, and Slovenia have made plays to be seen as crypto hubs, while the city of Zug in Switzerland has been dubbed Crypto Valley and Estonia and Belarus have been jockying for position. And that doesn’t even count Europe’s traditional startup hubs, such as London and Paris.

Gnosis, founded by Martin Köppelmann and Stefan George, offers an Ethereum-based system for predicting the value of goods and markets. Originally part of Ethereum venture production studio ConsenSys, Gnosis was spun out in early 2017 and raised $12.5 million in an ICO later that spring.  All in Bits is also a partner in the project.

The Full Node team sent out an informal email to the local blockchain community asking if anyone was looking for space. They received almost 100 replies from people asking for space.

After several months of hunting, they found what they were looking for in a three-story brick building owned by Berlin’s Samwer brothers, cofounders of Rocket Internet.

While the location is starting off as a headquarters and coworking space, the longer-term goal is to create interactions between members that facilitate joint projects, experimentation, research, and hopefully the development of innovative ways to deploy blockchain technologies. The companies also have an option for a second floor in the building, which would double Full Node’s square footage.

Despite the fierce competition to attract blockchain startups, Full Node’s founders are optimistic that the space will make Berlin’s crypto community stronger and even more attractive to entrepreneurs who are searching for the ideal place to launch a startup and find the talent they need.

“Berlin has the character of being experimental and alternative,” Beneš said. “And I think Full Node is something that perfectly fits the spirit of the city. Berlin is going to become the crypto capital of Europe. And this space will be at the heart of a vibrant blockchain ecosystem.”