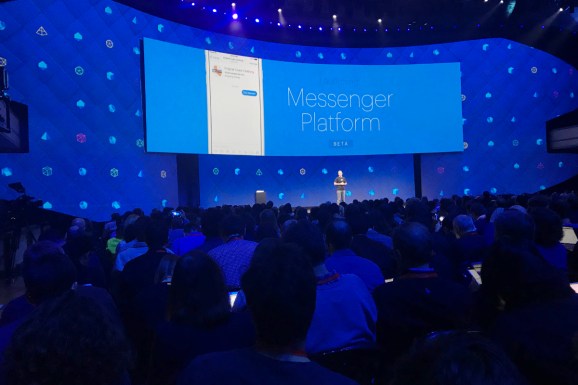 Messenger chief David Marcus talks about the Messenger Platform for automated bots at the F8 developer conference in April 2017.

New features have led to Facebook Messenger, an app used every month by 1.3 billion people, becoming too cluttered, said Messenger chief David Marcus today. Users should expect steps to be taken in 2018 to simplify the Messenger user experience.

“Over the last two years, we built a lot of capabilities to find the features that continue to set us apart. A lot of them have found their product market fit; some haven’t. While we raced to build these new features, the app became too cluttered. Expect to see us invest in massively simplifying and streamlining Messenger this year,” Marcus said in a blog post today.

The admission was part of a post Marcus published highlighting goals for Facebook Messenger in 2018. Others mentioned in the post are fairly predictable: More video messaging and use of Messenger to connect businesses with customers are in store for the year ahead, as are some new features for group chat.

“Messenger group chats already have lots of features like the ability to react to an individual message, the option to mention someone, add and remove people seamlessly, customization tools — but we have more in store for you this year,” he said.

The biggest change to the way Messenger works in recent years has been the introduction of the Messenger Platform for automated bots in April 2016. Since then, more than 200,000 third-party bots have been introduced, from personal finance bots to bots for games, marketing, and other purposes.

To find the right bot, a Discover tab was added to Messenger last June, and chat extensions were added for one-on-one and group chats. To help users complete tasks, M Suggestions were also added, which follow the words used in a conversation to suggest an action like creating a calendar event, finding a song or recipe, or sending a friend a happy birthday GIF.

Other changes to Messenger that took place last year include the rollout of ads on the front page, the expansion of peer-to-peer payments, and the rollout of Messenger Stories for users around the world.

Messenger isn’t the only service from Facebook’s family of apps expecting changes in the year ahead. Last week, head of News Feed Adam Mosseri and CEO Mark Zuckerberg announced that Facebook will show users fewer public posts and more from friends and family. The move will likely lead to drops in engagement metrics for publishers, trading for the hope of higher quality experiences on Facebook in the future, Zuckerberg said.

Following its first quarter of revenue above $10 billion, Zuckerberg warned investors in fall 2017 to expect investments in moderation and security services to significantly affect Facebook profitability this year.

In other recent Facebook news, the social media giant informed users of its intelligent assistant M that the personal assistant closed beta, extended to a few thousand users, will end January 19. A day later, news broke that Facebook will release a video chat device named Portal in May that will retail for about $499.